24-year-old Michael T. is a gay man, an agnostic, and a college graduate. He also supports Donald Trump for President. 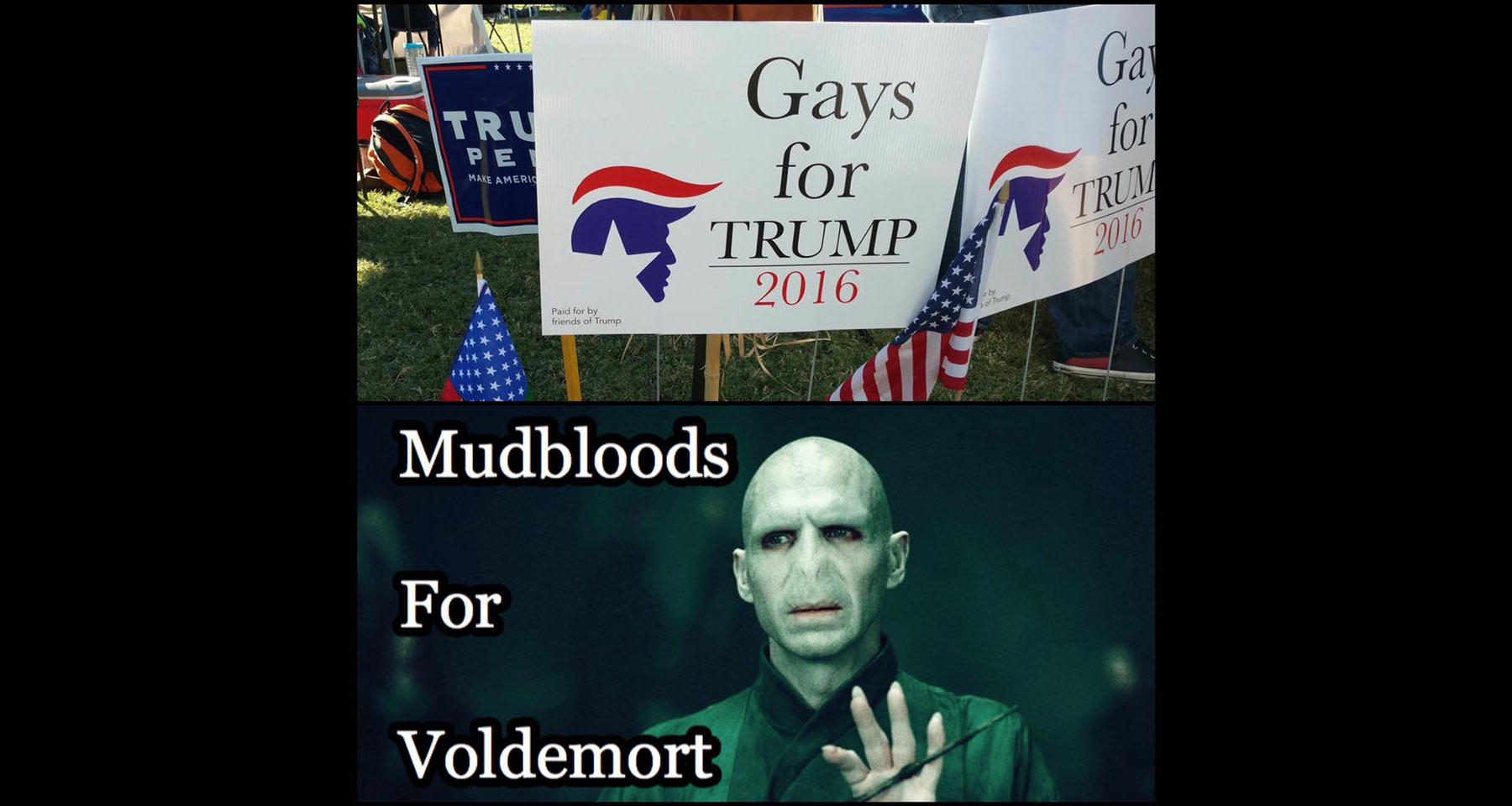 Michael, a police officer who graduated from Penn State (University Park) last year, is a representative of the 14 percent of gay and lesbian American voters who support Trump. He says the billionaire real estate magnate and his running mate Mike Pence would “do more to protect gays against our number one threat in the world, radical Islam.”

“Hillary will not protect you against our biggest threat which I will reiterate is ISIS and radical Islam. Many gay people realize this and they see Trump as the candidate who will do more to protect them. We don’t need another typical corrupt politician like Clinton in the White House. She does not care about gay people at all.”

I spoke with Michael, a life-long Republican who voted for Mitt Romney and supported Trump since he first started his campaign, to find out more about his perspective. At his request, out of concern for his own security, we’re not including his last name. (The interview has been slightly edited for grammar and clarity, as we do with all interviews.)

(Note from Hemant: As I said when we posted an interview with Robert Price, these opinions are not my own. I’m publishing this because Michael represents an unusual slice of Trump’s voting base that we should try to understand instead of pretending like he doesn’t exist.)

MCAFEE: Are you religious?

MICHAEL: Not at all. I consider myself to be Catholic, but I can’t remember the last time I went to church. I believe in the possibility of there being a higher creator that doesn’t necessarily have to be one all-powerful being. I’m more agnostic if anything but I do still consider myself to be Catholic even though I don’t believe in everything they teach. I guess you can say I’m Catholic by tradition. I don’t really dwell on religious questions.

MCAFEE: Tell me a little bit about why you support Trump. What policies do you like?

MICHAEL: I like the fact that he wants to secure the border and regulate who comes into the country. I cringe at the fact that Hillary [Clinton] wants open borders and I believe that a country is defined by its borders, language, and culture. By having the border secured we can make sure that we don’t have criminals from other countries, not just from Mexico, but from all over the world coming here. I think Hillary has offered weak solutions to this problem.

I like that Trump wants to replace Obamacare. This is personal for me and it’s one of the reasons I didn’t want to pursue medicine anymore in college. Doctors will not have a large say anymore in how to treat their patients and people’s prescriptions will go up as well as the taxes of the American public. I don’t know what can be used to replace it, but Trump wants to create competition among the states and as we all know competition is a very good factor to have in any type of business and we have to accept the reality that yes medicine is a business.

Trump is against free trade and what Clinton called “the gold standard.” I believe that companies should be punished for taking their jobs overseas and I believe that Trump will put America’s interests first. He is a businessman and, yes, he has had failures but you know what? Statistically that is going to happen. 9/10 businesses fail anyway but hey he did really well for himself. He turned 400 million dollars into 4.5 billion. My mom and dad were both born in NYC and they remember all the renovations that Trump and his father made during the ’70s when NYC was in crisis. The man knows how to get things done.

Probably the biggest thing for me is that Trump will protect the LGBT community from our greatest threat, radical Islam. Hillary and Obama won’t even mention the words “radical Islam.” Trump has the endorsement of many generals and I have full confidence that he will work with them and the Russians to eliminate ISIS, which is the group gay people like myself should really be fearing. Mike Pence, although backwards on some issues, is not our greatest threat; rather it takes the form of ISIS. After Orlando, I have no doubt in my mind that this is true. The shooter was inspired by radical Islamic ideologies and Trump will ensure that ISIS will be eliminated by cutting off the oil supply to Iraq and by working with his military advisors.

MCAFEE: Thank you for bringing that up. As you are probably aware, Pence has a real record of restricting LGBT rights based on “religious freedom.” He has also supported conversion therapy, a discredited method of changing sexual orientation. Do you support these positions or do you like Trump so much that you’re able to discount Pence’s fanaticism?

MICHAEL: As I said Pence is very backwards on LGBT issues, and I highly doubt that these will be implemented nationwide. He is, however, a very strong candidate on other issues such as the economy, job creation, and border security. And, of course, I don’t support any of these policies.

MCAFEE: Would you still vote for Trump if Pence was in complete control of domestic and foreign policies?

MICHAEL: Yes, but in all fairness, this is about the candidates more than it is about the running mates. No one is really looking at this from Pence’s or Kaine’s prospective. They care more about whether it’s going to be Hillary or Trump. It’s their race… the VP is just there on the side lines.

MCAFEE: Do a lot of police officers you know support Trump?

MICHAEL: Yes, a great majority of them support Trump. The others either hate both candidates or are voting third party. I haven’t met one officer yet who’s voting for Hillary. A lot of them didn’t take kindly to how she treated her secret service members as Secretary of State or as First Lady.

MCAFEE: Do you know a lot of other gay people who support Trump? Statistically, it is an anomaly.

MICHAEL: Yes, my ex who’s also Hispanic is voting Trump, as well as my previous ex who’s Asian. I know a gay couple that is also voting Trump as well as another friend who is voting. I know a couple of people voting for Jill Stein. And, yes, I’m friends with many gay guys who are voting for Hillary on Facebook. I think that, yes, most gay people will vote for Hillary, but there are still many who will vote for Trump or a third party. The community is very divided on this issue. [Editor’s note: An NBC News/SurveyMonkey poll found that 72% of LGBT Americans support Clinton, while only 20% support Trump.]

MCAFEE: Do you think Trump will win the election? Why or why not?

MICHAEL: I originally thought Hillary would win with a landslide but now I’m seeing a lot of polls saying that Trump is gaining on her. In reality, it’s probably going to be a close one with Hillary in the lead. I don’t really trust some of these polls, anyway. The reason why Hillary might win is because she’s the standard politician that people figure will be a safe choice. But there’s more enthusiasm for Trump with his supporters than with hers.

MCAFEE: What do you think about the fact that the Human Rights Campaign, which fights for LGBT rights, has endorsed Hillary Clinton over Trump? Does that factor into your decision?

MICHAEL: No it doesn’t. It doesn’t surprise me since a lot of people in that organization lean Democrat. It’s just the way things are I guess.

MCAFEE: Is there anything else you’d like to add for our readers, who might think it’s impossible for a gay person to support Trump?

MICHAEL: I’d like to say that Trump is not perfect — he’s human. But he will protect us from the greatest threat the LGBT community faces today, which is radical Islam. I don’t want another Orlando to happen; I don’t want a president who’s too PC to say who the real bad guys are. Radical Islamic extremists pose the greatest danger to gays, and Trump is the only one of the two candidates who can effectively protect us. To also set the record straight: Trump is not anti-LGBT. If you watched his speech at the RNC, he said it’s so good to hear the audience clap after he said he will not let another Orlando happen.

October 24, 2016
Are Atheist Comedians Funnier Than Religious Ones? Jim Gaffigan Offers a Response
Next Post

October 24, 2016 Teresa MacBain's Return to God is Distressing to Many Closeted Pastors
Browse Our Archives
What Are Your Thoughts?leave a comment