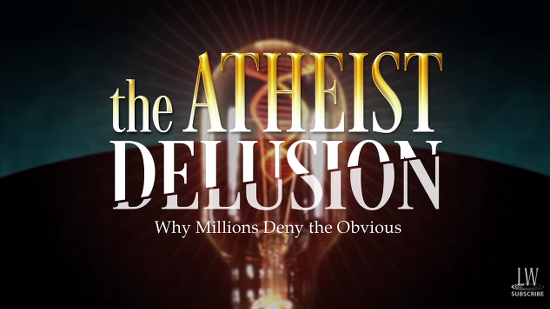 As of this writing, the movie has 3.1 stars out of a possible 10. Why is it performing so poorly?

This is a film with the tagline, “Atheism destroyed with one scientific question,” referring to the supposed impossible-to-explain complexity of DNA. But “irreducible complexity” is a bizarre way to prove the existence of God. Not only can scientists explain how many of the complex structures in our body evolved (to anyone willing to listen and learn), even if there were aspects of our evolution that we couldn’t explain, it’s not necessarily proof of God’s existence — much less the divinity of Jesus. It just means we don’t know everything and more research may illuminate our ignorance in some of those cases.

It’s also not a good movie. The hour-long film contains about 20 minutes of material regarding the “science” — mostly consisting of interviews with people who have clearly never thought about this subject before — while the rest is just Comfort proselytizing. There’s no storyline. There’s no focus. You won’t walk away with more knowledge than you came in with.

We’ve reviewed the film here. Needless to say, your atheism won’t be destroyed.

But Comfort doesn’t buy any of that, as he explained on Facebook: 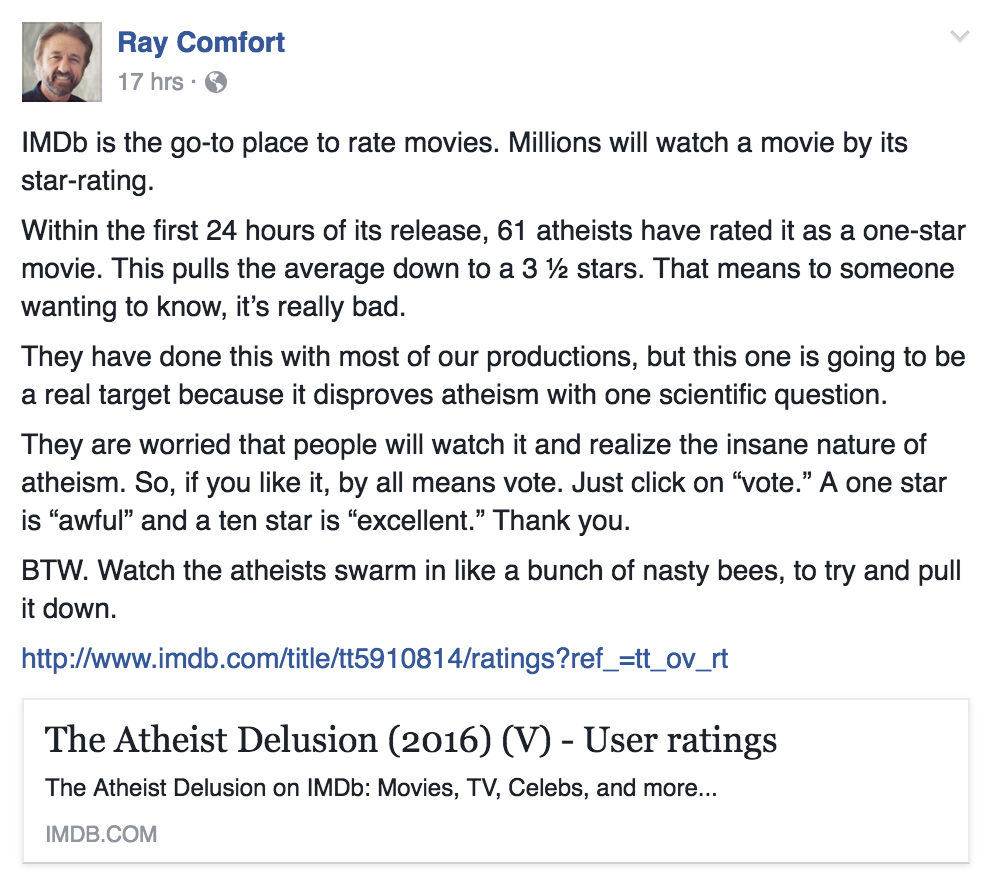 IMDb is the go-to place to rate movies. Millions will watch a movie by its star-rating.

Within the first 24 hours of its release, 61 atheists have rated it as a one-star movie. This pulls the average down to a 3 ½ stars. That means to someone wanting to know, it’s really bad.

They have done this with most of our productions, but this one is going to be a real target because it disproves atheism with one scientific question.

They are worried that people will watch it and realize the insane nature of atheism. So, if you like it, by all means vote. Just click on “vote.” A one star is “awful” and a ten star is “excellent.” Thank you.

BTW. Watch the atheists swarm in like a bunch of nasty bees, to try and pull it down.

That’s a lot of assumptions right there.

Comfort doesn’t know “61 atheists have rated it as a one-star movie” because IMDB doesn’t indicate voters’ religious affiliations. Nor has there been any coordinated effort to downvote his movie, as far as I know. Nor are atheists trying to “pull it down.”

(Four of the 1-star reviews, by the way, came from IMDB’s top 1000 voters. That is, people who regularly give movies ratings thought this was awful. Hardly a “swarm” of atheists visiting IMDB just to spite Comfort.)

By all means, watch the movie. It’s kind of like reading the Bible: You’ll laugh your ass off and become an even stronger atheist by the end of it.

There’s no conspiracy here. And I’m almost positive Comfort knows that since his previous movies didn’t fare so well, either. In fact, just last year, when his anti-gay film Audacity came out, Comfort blamed atheists for giving it bad reviews, saying we “hijacked” IMDB.

Sound familiar? It’s ironic that Comfort condemns atheists for brigading his film… while asking his Christian followers to do the exact same thing.

He’s not alone, either. In 2014, Comfort’s friend and colleague Kirk Cameron had a similar experience when his movie Saving Christmas became, for a time, the lowest rated movie in IMDB’s history. He, too, asked his fans to give it positive reviews.

Maybe the problem is that Comfort’s movies are just downright awful. They’re preachy, they’re misleading, they’re flat-out wrong on the science, and they use false stereotypes of the very people he’s trying to reach.

You’re not going to win over an audience when you insult their intelligence.

October 24, 2016
Now This Is How You Sign a Permission Slip So Your Son Can Read Fahrenheit 451 in School
Next Post