Are Atheist Comedians Funnier Than Religious Ones? Jim Gaffigan Offers a Response

Do atheist comedians tell better jokes? That’s what Jim Gaffigan, an extremely popular stand-up who also happens to be openly Catholic, responded to in a new video for Big Think. 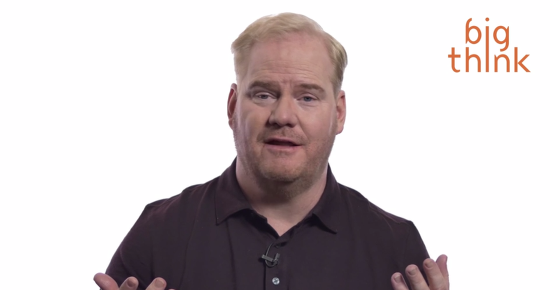 … being a self-identified Christian is so loaded in my field of standup comedy which has such a contrarian spirit. Look the Catholic Church has done horrible things. Horrible things. You know: sexism, bigotry, just monstrous things.

But so has the United States of America. I mean genocide, enslaving people. But I’m still American and I feel a sense of pride in that. I’m not apologetic. Like when I travel internationally, and if people are negative towards Americans, I get angry. I get annoyed. So for me, it’s not about the participants in this belief system that I share. It’s what the belief system provides me. The concept of mercy is very appealing to me. The concept that there is something greater than me that is forgiving is very important to me.

Theological debate aside, Gaffigan has included plenty of jokes about religion in his act. But they’re the kind of jokes you can make from the inside — mocking the way fellow Catholics act, not necessarily the beliefs they hold. He wants religious people to laugh with him. He’s not trying to get them to abandon their faith.

I’ll freely admit I’m a huge fan of his. Gaffigan cracks me up. But George Carlin made me laugh while also shaping my beliefs. He had a bigger impact in my life, as have other comedians who were clever enough to pick apart religion in a way I had never considered before.

This is a matter of style. Gaffigan’s schtick is taking a mundane topic (bowling, Hot Pockets, bacon) and making every possible joke he can about it. There’s nothing wrong with that, and he does it well.

For comedians who make atheism part of their act, though, they’re actively trying to “punch up” as high as they can. They’re going after faith leaders, hypocrisy, irrational beliefs, and religious institutions as a whole. It’s a different type of comedy. It’s not necessarily funnier (though it can be), but for those receptive to it, it has tremendous impact.

It’s frankly unfair to ask Gaffigan whether atheists are “better comedians for their irreverence,” because it’s comparing two contrasting styles of comedy. It’s like asking a virtuoso musician whether biologists do more good in the world. It depends on the metric you’re using. There’s no one right answer, and there are plenty of comedians who have done well for themselves while staying the hell away from religion. (Hello, Jerry Seinfeld.) I’ve also heard plenty of atheist comedians who didn’t make me laugh at all.

As Gaffigan says, people in his profession don’t want to be comedians with adjectives in front of their names.

And being a funny comedian doesn’t mean you’re required to tackle one particular subject.

October 24, 2016 He's Agnostic, He's Gay, and He's Voting for Donald Trump
Browse Our Archives
What Are Your Thoughts?leave a comment