In 2012, a week before the election took place, Pat Robertson announced that God told him Mitt Romney was not only going to “absolutely” win the election but win two straight terms.

Either God was playing a joke on Robertson… or He doesn’t exist. Point being, Robertson’s track record on presidential elections isn’t exactly stellar.

That’s why it shouldn’t concern anyone that Robertson now says you’d be foolish to bet against Donald Trump this time around. He made the remarks during a Trump rally at Virginia’s Regent University, the school Robertson founded, yesterday afternoon: 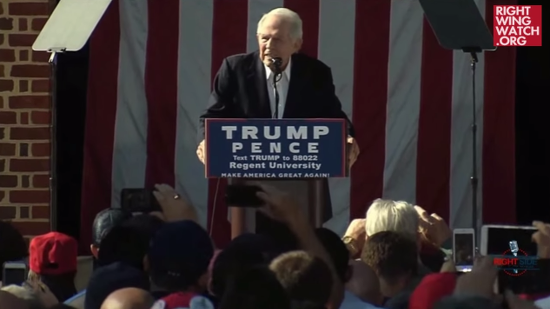 The televangelist recounted meeting Trump for the first time years ago while attending an Evander Holyfield fight. At the time, Trump was facing financial difficulties, but assured Robertson that he would recover… and he did, which prompted Robertson to send a warning to the professional bookies in Las Vegas.

“I want to give a warning to the bookies in Vegas,” Robertson said. “If you bet against Donald Trump, you’re gonna lose your shirt.”

Go ahead and buy all the shirts you want. They’re not going anywhere.

The better question is how Robertson’s going to react when he realizes that God, for the second election in a row, has lied to him. Will he apologize or pretend like he never said anything?

October 23, 2016
She Wore This Halloween Costume to Spite Her Fundamentalist Christian Mother
Next Post

October 23, 2016 Ray Comfort's Movie The Atheist Delusion Is Now Free To Watch Online
Browse Our Archives
What Are Your Thoughts?leave a comment