Green Party presidential candidate Jill Stein continued her march into absurdity this week, and her claims are worth responding to with facts. 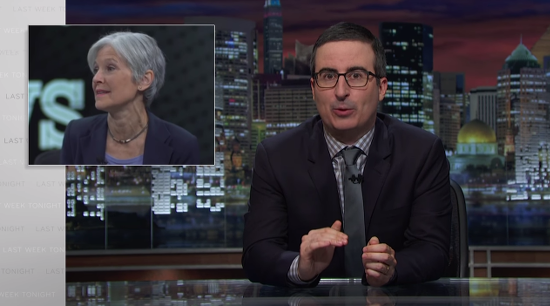 On Friday, Stein and her party announced that the global corporate conspiracy extends beyond the likes of Big Pharma and into the venerable world of political satire, launching an expose of popular left-wing comedian and TV host John Oliver, who picked apart her policy ideas during a recent segment on Last Week Tonight. She posted this meme on Facebook accusing the former Daily Show star of “secret connections to corporate corruption”: 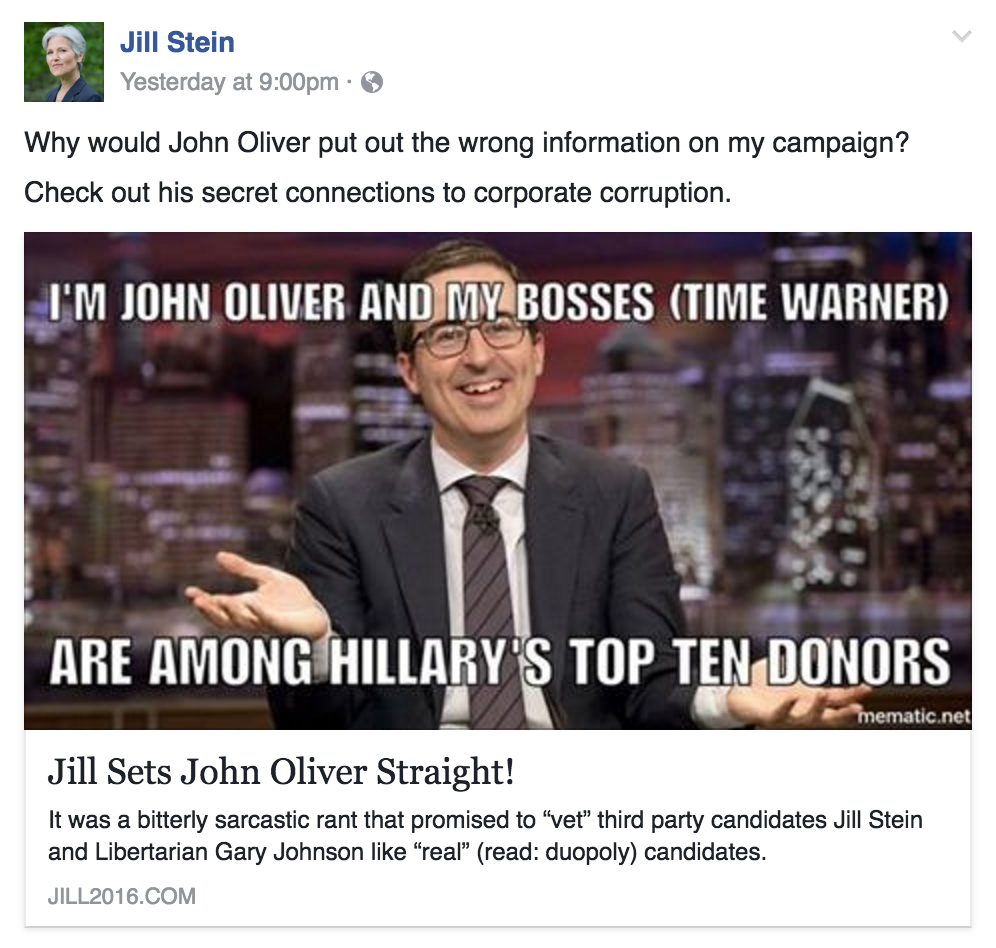 Oliver had criticized her statements on vaccines and portrayed her mechanism for eliminating student debt as unworkable. The meme links to her campaign site, where the “rebuttal” is all ad hominem and no fact, complaining that Oliver’s satirical critique was a “demeaning,” “bitterly sarcastic rant.” So a politician regularly demeans those who don’t support her in bitter, sarcastic rants, but demands immunity from such criticism from the public?

Stein’s campaign then takes the very, very low road of seeking to destroy Oliver by accusing him of being dirty, by definition, due to his income… an income progressives gladly provide him for his brilliant nightly takedown of the right. Finally, and most absurdly, a national presidential campaign lowers itself by blaming declining donations on a comedian and with Trump-like juvenile whining:

Gosh, it was almost as if they weren’t interested in the truth. It’s almost as if they just wanted to do a hatchet job… John Oliver and his cronies at Time/Warner obviously knew what they were doing…lol! Oliver stated flatly that Jill doesn’t understand the policy implications of using quantitative easing to cancel student debt. Baloney!

Oliver, instead, intent on proving Jill a fool, chose to run a sound bite that was (of course) taken out of context in order to make her words fit his narrative… Well, I guess we can’t really expect accuracy from a comedian, can we? …There will always be the John Oliver’s of the world. His hands are far from clean — he’s a millionaire, yet proclaims bailing out students in debt as a wholly unworkable plan. Plus, his employer — Time Warner — is among Hillary’s top 10 donors! But we’re stronger than a wildly inaccurate and demeaning comedy sketch…

… It’s greatly affecting the donations to our campaign.

Let’s hope Stein and Trump (who wanted Saturday Night Live canceled for mocking his debate behavior) blow the lid off Big Satire, proving once and for all Mark Twain‘s corporate ties to big riverboat companies and Voltaire‘s to Parisian theater moguls.

On Friday, in a town hall meeting sponsored by The Young Turks, Stein warned that the world will literally end if we don’t vote for her:

“We’re not just deciding what kind of world we will have, but whether we will have a world or not…”

She pointed out that every human being in the world will actually die without her leadership, boldly calling on the EPA to add humans to the endangered species list:

The EPA has the authority to protect our environment and to protect our health that depends on the environment. Since when is human extinction compatible with human health? In my view, it’s within the purview of the Environmental Protection Agency to ensure that humanity does not go extinct. That means the EPA needs to be part of this emergency.

It is within the authority of the @EPA to ensure humanity does not go extinct. #tytlive #GreenNewDeal

It is within the authority of the @EPA to ensure humanity does not go extinct.

Although climate scientists warn we’re facing the extinction of an unacceptably terrible number of species, no credible ones are warning of imminent human extinction. Yet that’s a theme of the website Truthout, which promotes Greens with headlines like “Last Hours of Humanity: Warming the World to Extinction.”

She’s been proclaiming this environmentally unhelpful pseudoscientific insanity since at least February, when she threatened that we’ll all die, every one of us, if we don’t vote for her:

We are facing extinction right now as a biosphere; we are undergoing extinction that we will not survive… there is no going forward here. We are at the edge of the cliff…

She then repeated this most extreme of all possible extremist claims as a tweet:

We are facing extinction right now, we are at the edge of the cliff.

I say this passionately and from experience: the most effective environmental NGOs know well that breathless hyperbole is incredibly dangerous for eroding the trust of the public and policymakers.

During the Q&A, producer Bec Gill with the ScIQ YouTube channel — my new hero — asked Stein:

I’m not going to take the time to transcribe Stein’s reply; the link goes straight to the full audio and has a rough transcript. You’ll hear the identical lengthy and irrelevant rant about FDA, Monsanto, and Vioxx she’s been repeating for months. What’s important to note is that Stein did not deny that vaccines endanger children’s health and offered those names as evidence for vaccine harm.

Let me repeat that:

I’ll pause while that sinks in…

On a totally unrelated note, Stein also informed Young Turks host Cenk Uygur of her firm opposition to the politics of fear.

I was part of a movement to remove mercury from vaccines. Incredibly, this public health win has been twisted to smear me as “anti-vaccine.”

Wakefield led that movement that forced mercury’s removal, while hundreds of researchers investigated but found no evidence of harm. What does Dr. Stein think of a confirmed hoax which wasted millions in public health dollars, frightened thousands of families out of vaccinating, and resulted in dozens of tragically preventable deaths? Incredibly, she calls it a “public win”!

If You’re Green, Trump’s Really Not So Scary

This week, Stein also added economic reasons to her increasingly louder message that Trump is less scary than Clinton: 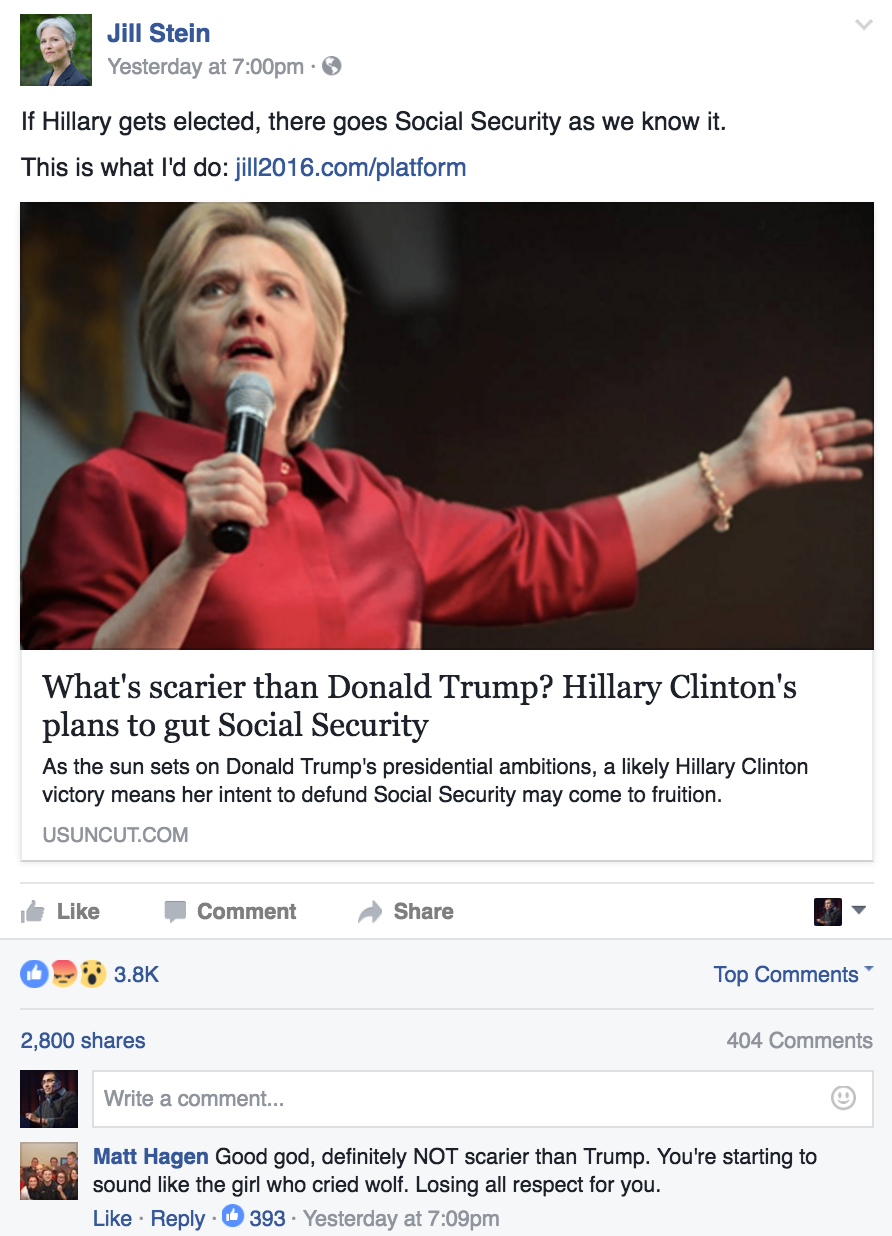 Maybe the day will come when I’m no longer stunned by this party I once admired, but it’s not here yet. Expect to see more from them in the days ahead explaining why, on more and more issues, Trump is relatively benign.

As always, I encourage you to check the links above, which I always provide for full context, so you may verify that quotes are not misinterpreted. If you have good reason to believe there’s a mischaracterization, give specifics and rationale in the comments. Never will I intentionally twist another’s meaning, something I despise. The knee-jerk, unspecified cries of “Lies!” or “Out of context!” I get from those who disagree deserve and will receive dismissal.

Let me finally make one thing damned clear, before the next deluge of Greens’ childish slander (“Shill! Paid by DNC!”): I have not knowingly been in touch this election season with anyone, in any way, connected to any campaign, and no one pitches a thing to me. My motivations lie solely in progressive humanism, especially guarding nature, secularism, and science. The volume of personal attacks and crazed accusations I receive from former fellow Greens for supporting Democrats — stopping Donald Trump being my top priority — is unbelievable. It’s gravely disappointing that Greens rely so heavily on personal attacks on principled progressives.

October 23, 2016 Why I, As An Atheist, Am Voting for Hillary Clinton
Browse Our Archives
What Are Your Thoughts?leave a comment