A Christian Woman Talks About Why She’s Scared of Abandoning Her Faith October 23, 2016 Hemant Mehta

Anthony’s latest video features a woman named Katie who says at one point that she’s genuinely scared about abandoning her faith, even if she accepts scientific explanations, because “what’s the big fucking meaning of living”? It’s an emotional scene that I’m sure has played out in the minds of many doubters. 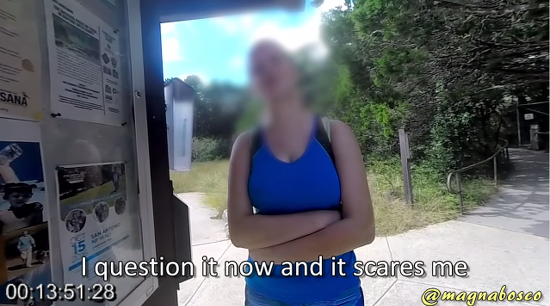 She deserves a lot of credit for being so open and honest. Most people, at least in my experience, aren’t willing to question their own beliefs because it’s uncomfortable. She did so with a complete stranger. Who knows where she goes from here, but the first step to shedding your faith is accepting that you believe certain things without evidence.

October 23, 2016
Why I, As An Atheist, Am Voting for Hillary Clinton
Next Post

October 23, 2016 Podcast Ep. 132: Luke Fevin, Canadian Atheist Activist
"Any relationship between two people should be the type of relationship that allows for a ..."
NotAgain Delightful Bītch Creationist Kent Hovind “Bodyslammed” Me, Says ..."
"Did ya'll see the SciManDan video on Kent Hovind trash talking Carl Sagan? Worth checking ..."
Jezebel'sOlderSister Creationist Kent Hovind “Bodyslammed” Me, Says ..."
"Ooh, that points to an excellent strategy. Try to get them to sign onto a ..."
CirrusClown NC Lawmakers, Noting Their Own Hypocrisy, ..."
"That's one that I had not heard. "The Panther", sounds like a name that connotes ..."
democommiescrazierbrother NC Lawmakers, Noting Their Own Hypocrisy, ..."
Browse Our Archives
What Are Your Thoughts?leave a comment