Think That All Babies Are Born as Atheists? This Guy Swears They’re Actually Muslims

Religion is mentioned a few times, in passing, in this New Yorker piece about Donald Trump supporters. By far the most jarring statement on the topic comes from a man named Saleem Mohammed, a peddler of political hats and shirts. Mohammed, as you might’ve guessed, is a Muslim.

He offers no further explanation, and the subject is dropped. 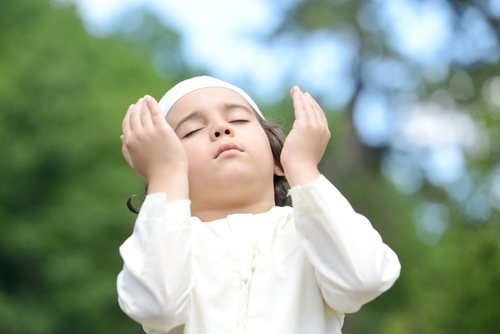 To me, it’s self-evident that babies are born atheists (as in, they have no concept of God or religion; not as in, they are active disbelievers in the divine. Hemant riffed on all that here). Calling all babies de facto atheists is a reasonable and defensible statement, I think.

By contrast, what is reasonable and defensible about calling all babies Muslims, as Saleem Mohammed does? Under which worldview can that possibly be true?

Under Islam, that’s what. In fact, we learn from the website Islam 101 that

The Prophet Muhammad said, “No babe is born but upon Fitra (as a Muslim). It is his parents who make him a Jew or a Christian or a Polytheist.” (Sahih Muslim, Book 033, Number 6426)

Islam is the religion of all Prophets, Adam to Muhammad. Children are not born out of any sin, original, inherited or derived. They are born on the religion of their nature, i.e., Islam.

Ha. The religion of their nature. Even Christians and Jews don’t, as a rule, muster that level of arrogance and chutzpah.

[J]ust as the child submits to the physical laws which Allah has put in nature, his soul also submits naturally to the fact that Allah is his Lord and Creator. But, his parents try to make him follow their own way and the child is not strong enough in the early stages of his life to resist or oppose the will of his parents.

There is (shocker) no evidence that something in the nature of every human being compels people to become Muslims. The notion that a baby, left to its own devices, and without the corrupting influence of non-Muslim parents, would naturally grow into a follower of Allah, is as preposterous as the belief that a completely abandoned infant, if it could survive, would somehow automatically speak Latin or know world geography.

Without a shadow of a doubt, religion as we know it is entirely learned behavior. And were the child, if he or she was cut off from all human contact, to make up its own mythology or religion, those stories wouldn’t even resemble the convoluted narratives of Islam. More likely, the youth would drift into some form of paganism or animism, perhaps ascribing special powers to anything from the Sun to bats or wolves.

The dubious joy of religion is that its adherents get to spout unadulterated humbug as if it is some kind of cosmic truth. The idea that all babies are Muslims is but the most recent example (to me) of the Big Lies that faithists tell with impunity.

October 22, 2016
A Church Leader Responds With Kindness After Former Pastor Announces His Atheism
Next Post