How Trump Would Tear Down the Wall (of Separation Between Church and State) October 22, 2016 Hemant Mehta

Donald Trump promises to build a wall, a big wall, a strong wall, to keep out Mexicans, but what about our most important wall? What about the Wall of Separation between Church and State for which our founding fathers fought? 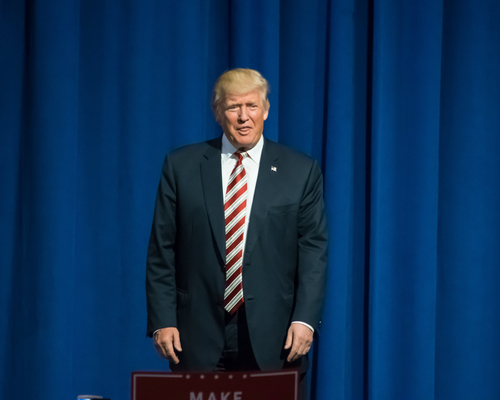 Trump doesn’t strike me as a particularly religious man — he rarely attends church and has demonstrated an extreme ignorance regarding his faith — but a Trump win in November would still be a loss for secular activists like myself.

Trump, a self-proclaimed Presbyterian who has had trouble remembering his favorite Bible verse, would be a threat to church/state separation for a number of reasons. For starters, he has pulled hard to the right in his effort to court evangelicals — a crucial voting bloc for any Republican presidential contender:

The Christians are being treated horribly because we have nobody to represent the Christians. Believe me, if I run and I win, I will be the greatest representative of the Christians they’ve had in a long time.

Throughout this election cycle, Trump has called the Bible his favorite book, promised to unite Americans under “one God,” and even said the United States is a “Judeo-Christian Nation.” These remarks might seem benign, but, unfortunately, his attempts to appeal to the Christian Right haven’t been limited to vague proclamations.

The real estate magnate hasn’t put forth many concrete policy plans, but one proposal he continues to champion would chip away at the Establishment Clause: repealing the Johnson Amendment, which would allow churches to endorse candidates from the pulpit without losing their tax exemptions.

Trump claims the Johnson Amendment, passed in 1954 after being proposed by then-Senator Lyndon B. Johnson, muzzles churches and silences religious leaders. This is what he said to church leaders about the amendment at an American Renewal Project event on Aug. 11:

As Trump worked to solidify his Republican base, he also adopted a strict anti-choice approach when it comes to abortion. He even went as far as to say in May that women should receive “some sort of punishment” if they ever needed that particular medical procedure. Trump may not tie his position to religion, but the fact is that the groups most strongly opposed to abortion are religious in nature.

Even as president, Trump wouldn’t likely to be able to override Roe v. Wade. He has promised, however, to appoint Supreme Court Justices who would overturn abortion rights, gay rights, and more. I can’t imagine anything more damaging to those fighting for a secular America.

Trump has also proposed a blanket ban on Muslims entering the U.S., clearly violating the U.S. Constitution’s guarantee to freedom of religion, and earning him an “F” in the Secular Coalition for America’s voting guide. But perhaps the biggest threat posed by Trump’s campaign to the separation of church and state doesn’t come from Trump himself… it comes from his running mate.

I strongly oppose the Employment Non-Discrimination Act. We must stand for the right of every American to practice their faith according to the dictates of their conscience, whether it be in the public square or in the workplace.

There’s no telling how much of Pence’s religious fundamentalism would rub off on Trump, but we do know Pence would be a heartbeat away from the presidency if Trump were elected and that he’d be the most powerful VP to ever hold the office. We also know that ticket would spell disaster for all of us who work to protect the American government from the encroachment of religion.

October 22, 2016
Christian Pseudo-Historian David Barton (Who Only Has a Bachelor's Degree): "I've Got a Ph.D."
Next Post

October 22, 2016 Outrage Ensues After Soccer Star Cristiano Ronaldo Posts Photo Standing Next to Buddha Statue
Browse Our Archives
What Are Your Thoughts?leave a comment