Christian Pseudo-Historian David Barton (Who Only Has a Bachelor’s Degree): “I’ve Got a Ph.D.” October 22, 2016 Hemant Mehta

Christian Pseudo-Historian David Barton (Who Only Has a Bachelor’s Degree): “I’ve Got a Ph.D.” 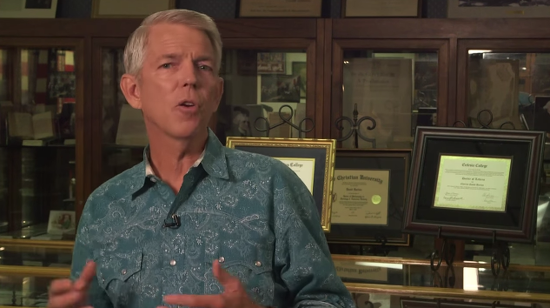 It’s that last one that makes no sense, because Barton didn’t seem to do anything to “earn” it. He didn’t write a dissertation, or step in a lab, or contribute to our knowledge. He just received it.

The big question was how Barton would react to this revelation. For a while, he just remained quiet, but on his “Wallbuilders Live” radio show yesterday, he once again lied about having a real Ph.D.

Everyone knows that God created only two genders, Barton insisted, except seemingly those with advanced degrees.

“Isn’t it interesting that for farmers and those of us who live in the country,” he said, “we don’t have trouble recognizing that in nature, there’s two genders, but it’s like the more letters you get after your name, the harder it is for you to recognize two genders … You know, I’ve got a Ph.D., but we joke, ‘How many Ph.D.s does it take to make you stupid?’”

I can answer that last question: Negative one Ph.D.s makes you stupid.

It’s insulting to everyone who’s ever worked — really worked — for that degree that David Barton, who has never been a serious scholar, thinks he can get away with just claiming a Ph.D. he never earned.

October 22, 2016
Think That All Babies Are Born as Atheists? This Guy Swears They're Actually Muslims
Next Post