God appears to be not particularly enamored of the biblical initiative taken by Johan Huibers, the Dutch carpenter and entrepreneur who built two versions of Noah’s Ark, one of them “life-size.” The Christian P.T. Barnum wannabe has been plagued by one setback after another.

Earlier this year, Huibers announced that the bigger of his floating tourist attractions would be lifted onto a barge (both arks are rudderless and engineless) and transported to Brazil on the occasion of the Summer Olympics. That plan faltered, Huibers and his staff had to concede:

“Due to the current state of affairs and the challenges facing Brazil (i.e. the Olympics), political, economical and personal safety and Zika virus uncertainty, key supporters of the Ark have expressed grave concern about sailing to Rio at this moment in time. We believe it’s in the best interest of the Ark project and its entire team to postpone its voyage to Brazil. … We fully expect our future plans will include bringing Noah’s Ark to the people of Brazil at a future time.”

In June, the smaller of the two Dutch Arks was involved in a collision in the port of Oslo, Norway, sustaining extensive damage to the pine cladding that hides the metal hull underneath the wooden skin.

Now, another mishap has befallen that fake ship. 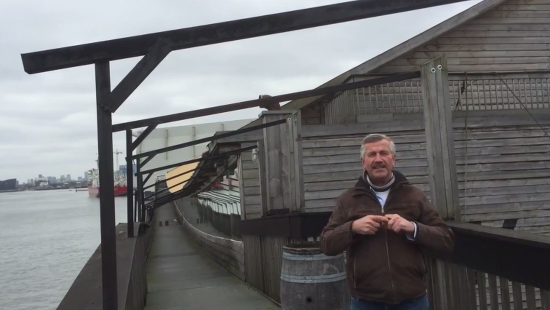 This week, a bailiff’s court in Denmark impounded the 230-feet-long mini-Ark, anchored in the harbor of Esbjerg. At issue is an unpaid bill of 500,000 Danish crowns ($73,000). That’s the amount that a shipyard in Svendborg says it is owed for repairs carried out two years ago.

Team Huibers contends that the original bill was higher than warranted, and that the work performed by the Danes showed “errors and deficiencies.”

Although it remains open to tourists, the vessel is currently prohibited from going anywhere. In a mirth-inducing clarification, this Danish site reports that

Normal procedure for this kind of enforcement proceeding is to remove part of the ship, so it can not sail, but Noah’s Ark has no engine…

… making it, by (intelligent?) design, incapable of escaping anyway.

As far as I know, there are three “Noah’s Arks” (including the one in Kentucky); so far, the Almighty isn’t smiling upon a single one.

The faithful plow on.

(Screenshot via Ark of Noah. Thanks to Kenneth for the link)

October 21, 2016
In Australia, Nurses Who Spread Lies About Vaccines Face Prosecution As Regulators Crack Down
Next Post