Here’s a heartwarming story that gets weird at the end.

Derek Dee, a firefighter and paramedic for the Phoenix Fire Department, recently got a call that he and his team needed to attend to someone who was “clinically dead.” When he saw the address, he realized the victim had to be one of his parents.

He kept his cool, got there quickly, and — wouldn’t you know it — 70-year-old Tommy Dee was saved and looks to be on the road to a full recovery. Fantastic news all around! 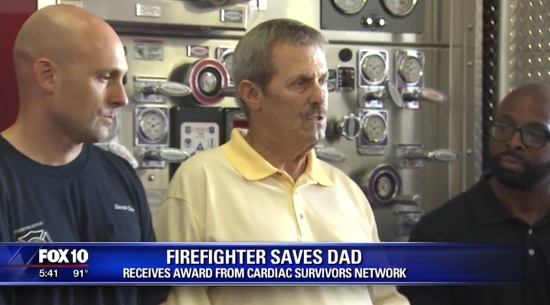 Where it gets weird is Tommy’s reaction:

“This is for the Agnostics and the Atheists out there, come on, who are you kidding,” Tommy said.

I guess that’s supposed to mean that God’s the only reason his father is still alive…? It took supernatural intervention?

Both father and son credit a large group in helping Tommy stay alive; his wife for finding him, his neighbor for initially performing CPR, the dispatchers and the rest of the firefighters and nurses.

Just to be clear, Tommy himself credited (1) his mother for finding dad early, (2) the neighbor who performed CPR, and (3) all the professionals who came to the rescue.

But screw you, atheists. God did it. So there. (Somehow, God got no credit for trying to harm his father.)

(Screenshot via Fox 10 Phoenix. Thanks to Brian for the link)