Colorado State Rep. Gordon Klingenschmitt (whose one and only term is nearly over) said on his Pray In Jesus Name show recently that his health is just fine. Perfect, in fact.

That’s important to acknowledge because, if he dies, he wants you to know it was almost certainly Hillary Clinton‘s fault. 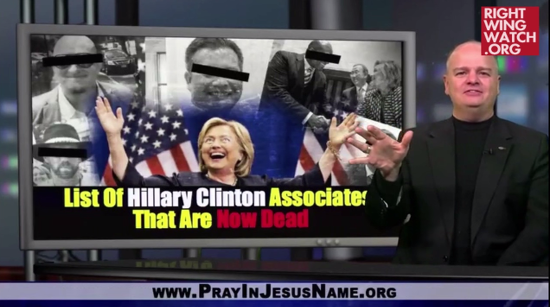 Klingenschmitt backed up that claim by reading a list of 53 people who died mysteriously, all of whom had ties to Clinton, including John F. Kennedy, Jr. (who died in a plane crash) and Supreme Court Justice Antonin Scalia (who died of natural causes).

“It is interesting that John Kennedy Jr., his plane exploded in mid-air just before Hillary Clinton announced that she was running for senator in New York,” he said. “What’s the timing on that? And now Justice Scalia? What’s the timing on that? Three days after Hillary’s campaign manager talks about ‘wet works’ and the reply comes, ‘Buckle down for the weekend’ and then Scalia dies with a pillow over his head? Interesting. How do they know about these things?”

Hillary Clinton’s been under scrutiny for her mismanagement of emails, but suddenly, she’s a master at calling in hit jobs against even her own allies without anyone knowing it?

If Klingenschmitt thinks that’s plausible, no wonder he believes in a talking snake and a man rising from the dead.

Why would Clinton want Klingenschmitt gone, anyway? Voters in Colorado already took away his power. My guess is he’s just upset that she doesn’t think about him at all.

October 21, 2016 A Presidential Candidate's Faith No Longer Matters As Much for the Religious Right
Browse Our Archives
What Are Your Thoughts?leave a comment