There’s a new movie opening today about Rachel Joy Scott, the first student killed in the Columbine High School massacre. It’s produced by the same Christian company that brought you God’s Not Dead.

I’m Not Ashamed is essentially the story of Rachel’s life, how she died while standing up for Jesus, and how that makes her a role model for other True Believers™. 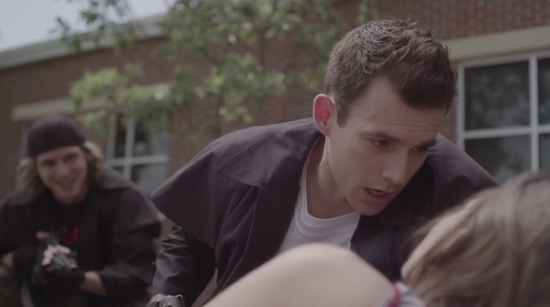 The relevant scene in the movie goes like this:

“What would Jesus do?” says [killer Dylan] Klebold.

“Do you still believe in God?” asks Harris.

“You know I do,” Rachel answers.

“Then go be with him,” Harris says before firing the fatal shot.

There are two things you need to know about that scene:

First is that Rachel’s friend Richard Costaldo, who survived the shooting, is the only witness to that incident. He said that’s what’s happened after he awoke from a coma. And while memory, especially during a tragedy, may be fickle, there’s no reason to suggest he made it all up. Just realize it’s one person’s recollection of what happened.

The second is that the official police reports from that day don’t say that Rachel died that way. They didn’t include the conversation in the report because they weren’t there to witness it; they knew how she died but not what was said leading up to it. (It’s also irrelevant in the sense that this wasn’t a hate-crime against Christians. Plenty of students who didn’t profess their faith died that day, too.)

So it’s not fair to say the scene, in some way, didn’t happen. The bigger question is whether Pure Flix should have based an entire movie around an incident that was witnessed by only one person. But, in their defense, movies have been based around one person’s unconfirmed testimony many times before. (2014’s Heaven is for Real earned more than $100 million at the box office. You’ll be shocked to learn that Heaven, in fact, is not for real.)

Not everyone agrees with that, though. When a couple of people at That Atheist Show argued that Pure Flix shouldn’t have made this film — saying “It is shameful that they are framing the entire premise of this movie around allegations that do not have any evidence to support them” — all hell broke loose. (One atheist YouTuber also mocked the entire trailer, though he didn’t focus on just that one scene.)

For days now, my news feed has been filled with reports claiming that “atheists” — all of us, apparently — are trashing this movie for daring to suggest Rachel died because of her faith.

“Atheists” are not trashing the movie. A couple of atheists merely questioned its premise. There’s a difference.

Needless to say, there’s no evidence that Klebold and Harris killed students because they themselves were atheists or because their victims were all religious. They were social outcasts who killed indiscriminately. They wanted to see mass casualties. There has been plenty written about their motives — Dave Cullen‘s book Columbine is superb — and no credible journalist has ever said religion was a motivating factor one way or the other even if it came up during the course of the day.

I don’t agree with the backlash against Pure Flix for building an entire film off of one person’s recollection. After all, this is the same studio that made God’s Not Dead based off of nobody‘s recollection. (Now that movie deserved criticism.)

I haven’t seen I’m Not Ashamed. But Rachel really was a Christian. She was a popular student, too, and the killers really didn’t like popular kids. There’s plenty of reason to believe Rachel would’ve been killed even if she had denied her faith in that fateful moment. It’s a tragedy no matter how you look at it. There’s no reason, though, to fault a Christian production company for financing a faith-based story based on one person’s anecdote, even if (like all filmmakers) they exaggerated everything.

If complete honesty is your standard for a film that’s “based on a true story,” I don’t know what movies will ever satisfy you.