A Presidential Candidate’s Faith No Longer Matters As Much for the Religious Right October 21, 2016 Hemant Mehta

The headlines about a new survey from PRRI/Brookings are mostly about how white evangelical Protestants are more like than ever before to accept a politician’s personal transgressions. Five years ago, a candidate having an affair, just to name one example, would have been acceptable to only 30% of white evangelicals. Today, with Donald Trump on the ticket, acceptance of “immoral” acts has jumped to 72% for the same group. So much for “Christian values.”

But another aspect of that survey also deserves attention.

We know that Hillary Clinton, while very public about being a Methodist, is not exactly celebrated as a “pious” candidate by religious conservatives. Meanwhile, Trump, whose Christianity is about as fake as his tan, is hailed by Religious Right leaders who seem to support him no matter what he says or does.

Given how irreligious Trump appears, despite what he says, does religion even matter in this election?

The PRRI/Brookings survey found that white evangelical Protestants no longer care as much if a presidential candidate is religious. 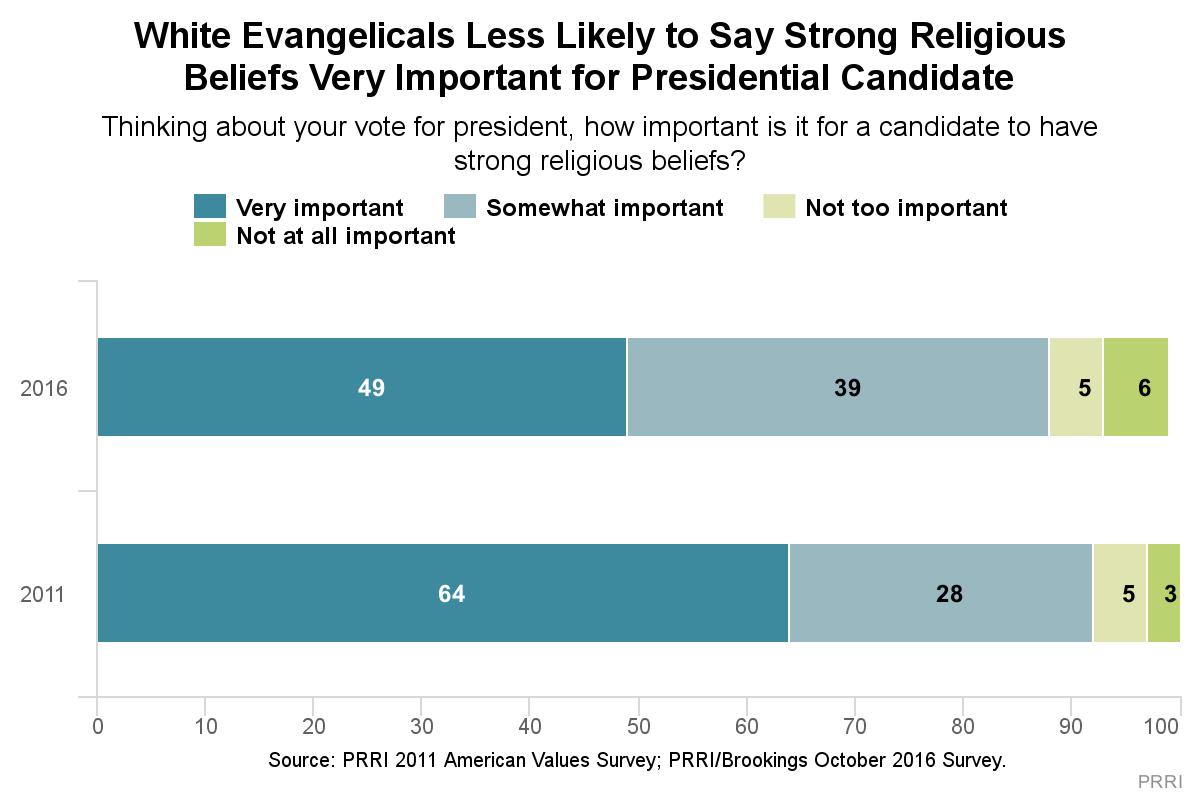 Today fewer than half (49%) of white evangelical Protestants say it is very important that a candidate have strong religious beliefs, while nearly two-thirds (64%) expressed this view in 2011.

That’s a huge drop. And the percentage of white evangelicals who don’t care at all about a president’s religion has doubled in the same time period, from 3% to 6%. That, coupled with the fact that more Americans than ever before would consider voting for an openly atheist President, means we’re finally getting to the point where non-religious candidates with some political savvy won’t have to overcome that long-standing, silly hurdle.

Donald Trump has made religion less of a factor in presidential races among the one group of people who have traditionally treated it as sacrosanct.

No small feat. Now, whether it’ll stay that way after Trump fades away, who knows. But if there’s anything to give Trump credit for, it’s that he’s exposed the hypocrisy of the Religious Right. Everyone finally sees through the “family values” lie. It was never about that. That’s just how conservatives got away from saying, “We’re just gonna vote Republican no matter what.” When the GOP candidate is about as far from a “family values” candidate as you can get, their political game is laid bare for all to see.

No one should’ve taken the Religious Right seriously before, but surely no one can take them seriously now. And the opening is getting larger for strong non-religious politicians who never before thought higher office was a possibility.