The Pennsylvania Bureau of Motor Vehicles can (and should) reject obscene and offensive license plate requests.

It makes no sense, however, that they rejected these three license plates suggestions from Jeffrey Prebeg Jr.: “ATHE1ST,” “NO GOD,” and “N0 G0D.” 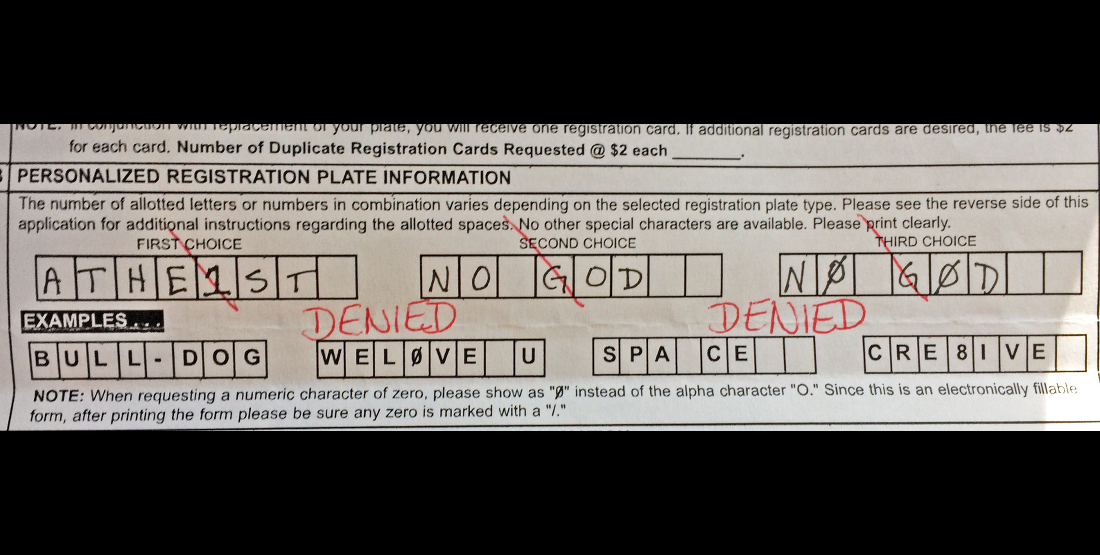 The Freedom From Religion Foundation is protesting those rejections, saying the office is violating the state’s Constitution:

It should be plain to see that a state government may not restrict an “ATHE1ST” or “NO GOD” personalized plate. An individual has a protected free speech right to select that message, as they would to select a religious message or any other message.

We are confident any Pennsylvania court would agree. A federal court in Pennsylvania took up a case similar to this in 2010. George Kalman wanted to name his film company “I Choose Hell Productions.” His choice was rejected by the state because it was “blasphemous.” The court held that this denial violated both the Establishment and Free Speech Clauses of the First Amendment.

We request a written response stating that the BMV will approve the ATHE1ST or NO GOD plate and will no longer enforce the “offensive to good taste and decency” restriction… If there are other reasons for this denial, legitimate reasons which do not infringe the First Amendment, we would be happy to hear them. Please contact me at your earliest convenience.

These aren’t anti-religious plate requests. Even if you interpret “No God” as an attack on faith instead of a statement of belief, what reason is there to reject “ATHE1ST”? The only reason that could possibly apply is that someone at the BMV felt it was offensive or obscene. As if the mere existence of atheists is too provocative for the state.

This decision ought to be overturned immediately before a lawsuit forces the state’s hand.

October 19, 2016
Anti-Trump Billboard, Written in Arabic, Says "He Can't Read This, But He Is Afraid of It"
Next Post