Here’s Why Some Hindus Are Embracing Donald Trump

Some key aspects of Hinduism are bhakti (devotion), dharma (what is right), and yoga (discipline), but that hasn’t stopped some Hindu nationalists from endorsing the presidential candidate who most opposes those ideals: Donald J. Trump. 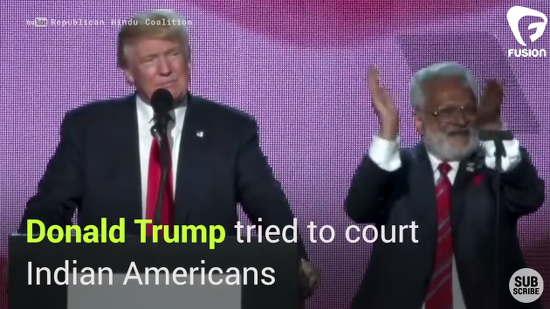 Hindu Sena, an Indian political group led by Hindu nationalist Vishnu Gupta, has repeatedly endorsed Trump for President of the United States. Members of the organization even burned effigies of Hillary Clinton in May. But why? Considering Trump’s own comments on India and remote information technology professionals, the support is more than a little confusing.

It has been pointed out by other journalists that Trump’s most passionate Hindu supporters are also ardent backers of India’s Prime Minister, Narendra Modi, a Hindu nationalist who Trump’s own chief campaign executive has called “the Reagan of India.” But that isn’t the only thing bringing Indian support to the Republican presidential candidate. Trump’s comments regarding terrorism and his proposed discrimination against Muslims may also resonate with some conservative Hindus.

In December of 2015, Trump called for a ban on all Muslims entering the United States. He later expanded that proposal when he said we should halt immigration from “any nation that has been compromised by terrorism.” These statements brought Trump the support of the majority of Southern conservatives, but Indians are facing similar crises and are equally vulnerable to fear-based campaigns.

Enter Vishnu Gupta, who founded the Hindu Sena organization in 2011 and has been detained several times since then for protests against Leftists in India. He has also protested against China, and assaulted a 70-year-old Muslim man who was arrested for playing a role in bombings in Mumbai, Delhi, and more. According to Gupta, “Only Donald Trump can save humanity.”

“The whole world is screaming against Islamic terrorism, and even India is not safe from it,” Gupta said.

Trump’s anti-Muslim rhetoric may appeal to Gupta and some other nationalist radicals, but the fact remains that most continue to see through the demagoguery. It should be noted that, while Trump has certainly amassed some Hindu fans, they are by no means the majority in the U.S. About 65 percent of Indian Americans are Democrats or lean toward the Democratic Party, according to a Pew Research study published in 2014. A second study conducted in August and September found that only seven percent of Indian Americans would vote for Trump.

So, while Trump’s niche support among certain Hindu groups is without doubt, its influence on the Nov. 8 election is likely to be negligible.