81-year-old Christine Nagel is a Canadian strongly opposed to the new law that allows people, in certain conditions, to opt for doctor-assisted suicide, because her Christian faith forbids it.

But something tells me she’s never actually opened her Bible… 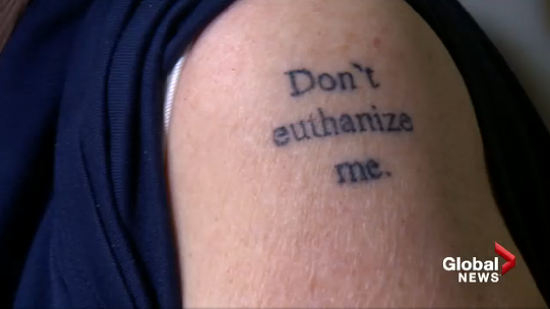 [Nagel] got a tattoo that reads, “don’t euthanize me.”

“If you want to pass a message on, put it on you,” Christine Nagel said bluntly. “They’re gonna find it. It’ll be staring at them blank in the face.”

Somehow, she missed the entire point of the new law, which says that euthanasia cannot occur without the patient’s consent. It’s not like doctors are running around the hospital looking for life support machines to unplug.

They sure as hell aren’t going to come into her room to unplug a machine, only to stop after they roll up her sleeve and see the tattoo.

Speaking of which, you’d think the devout Christian would have read Leviticus 19:28…

Do not cut your bodies for the dead or put tattoo marks on yourselves. I am the Lord.

Maybe she never got to that part…? I guess she’ll have plenty of time to read the Bible before the doctors come to kill her.

October 19, 2016
You Can't Call a Hot Dog a Hot Dog In Malaysia Anymore (to Appease Confused Muslim Tourists)
Next Post

October 19, 2016 Raif Badawi's Floggings Will Resume in Saudi Arabia, According to Inside Source
Browse Our Archives
What Are Your Thoughts?leave a comment