A Pastor Who Hid His Identity As an Atheist for Several Years Has Finally Come Out of the Closet October 19, 2016 Hemant Mehta

It was six years ago when “Adam Mann” appeared on ABC’s World News Tonight — in silhouette and with his voice altered — to talk about his struggle: He was a pastor who no longer believed in a God.

He maintained his secret for years after that, too, though he continued to help other pastors in his situation. In fact, he was a founder of The Clergy Project as well as its first member.

But earlier this month, at the Freedom From Religion Foundation’s annual convention, “Adam Mann” finally came out of the closet as Carter Warden, a now-former pastor. 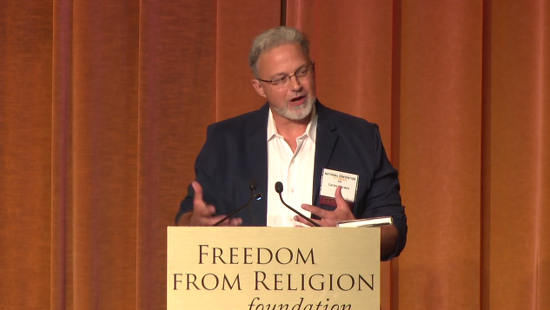 It’s fascinating to hear how he devoured books written by atheists over a rather short time period, because that feeling is near-universal among atheists who realize they’ve been lied to this whole time. For once, everything makes sense and none of it requires a supernatural leap.

Is there really an all-knowing, all-powerful, loving, intervening God as revealed in Scripture?…

My conclusion after 10 months of intense study, and following study, and still to this day, is “No, there is not. You are correct.”

So instead of deepening my faith, my intense study left me no choice but to abandon my once-precious faith. I did not “lose” my faith as though it was something that regrettably slipped away. Rather, I chose to discard it because it no longer made sense to me.

Some of the major reasons I no longer believe, in summary, are the contradictions in the biblical texts, the… despicable character of God in Scripture, the questions of theodicy, suffering in the world, the fallacies of answered prayer, the denial of modern science, and the harmful teachings of religion in general…

I have been living a life of secrecy, duplicity, and hypocrisy. But that stops today.

He added that he wasn’t sure how his family or friends would react to this revelation. But good for him for taking this tremendous step. I hope it gives others the courage to eventually do the same.