Waitress in SC Receives “Tip” from Christians Telling Her a “Woman’s Place Is In the Home” October 18, 2016 Hemant Mehta

***Update***: This happened at a Cracker Barrel. The waitress is “Renee” and the Christians are the “Watleys.”

A waitress from South Carolina received a “tip” from Christian customers who told her (via napkin) that she should remain in the home like a good biblical woman, calling her work a “disgrace,” and saying she’s the reason her husband surely cheats on her. 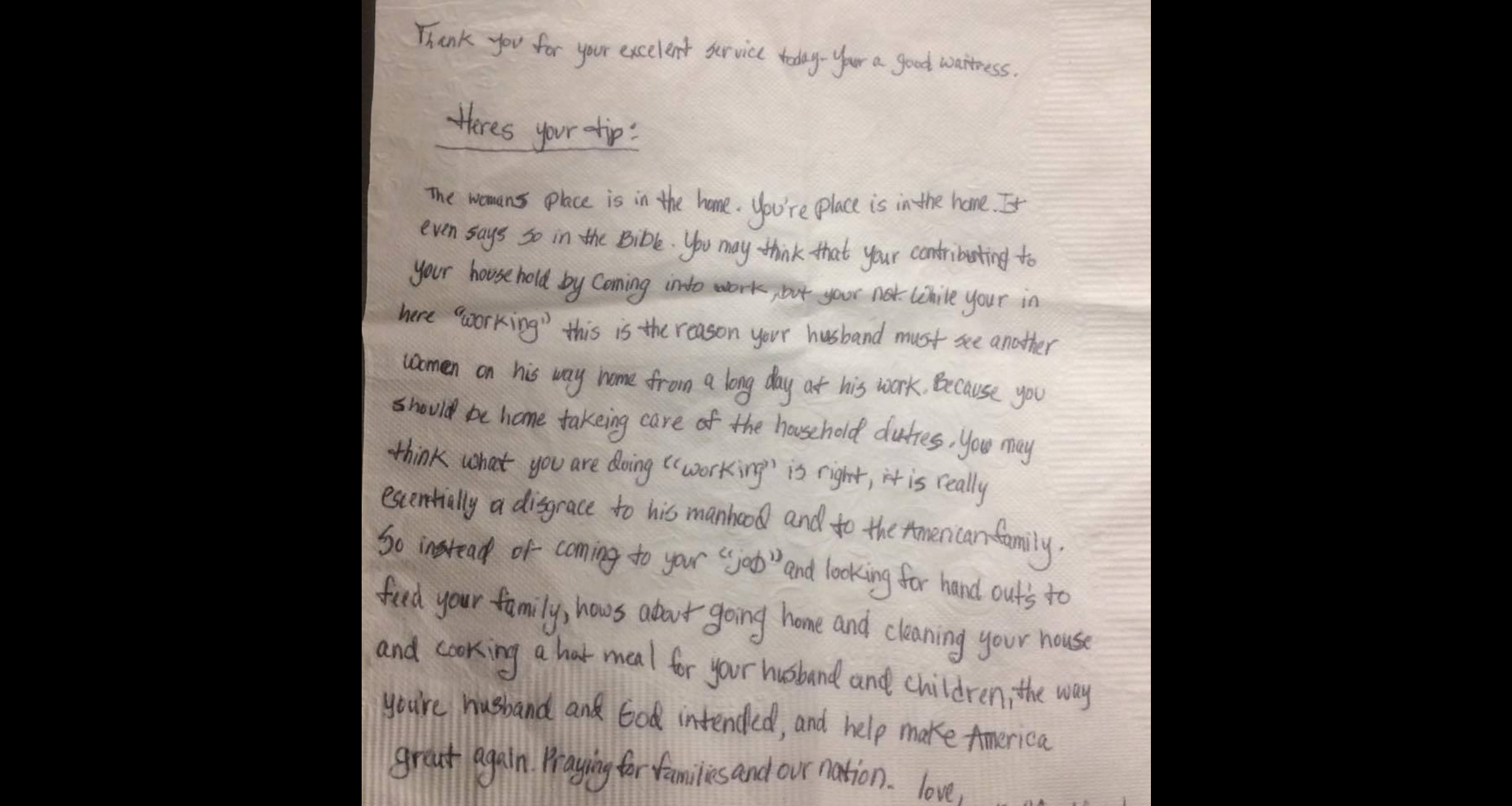 Thank you for your excellent service today — you’re a good waitress.

The woman’s place is in the home. Your place is in the home. It even says so in the Bible. You may think that you’re contributing to your household by coming into work, but you’re not. While you’re in here ‘working’ this is the reason your husband must see another woman on his way home from a long day at his work. Because you should be home taking care of the household duties, you may think what you are doing ‘working’ is right, it is really essentially a disgrace to his manhood and to the American family. So instead of coming to your ‘job’ and looking for handouts to feed your family, how’s about going home and cleaning your house and cooking a hot meal for your husband and children, the way your husband and God intended, and help make America great again. Praying for families and our nation.

They had no problem accepting her service while they sat in the restaurant, but they felt it was their job to treat her like dirt afterwards, despite knowing nothing about her life. Thanks, Jesus. (And Donald Trump, apparently, given the “make America great again” reference.)

We don’t know where this took place, but the waitress’ friend submitted a picture of the napkin to a local news station. Believe it or not, the waitress doesn’t appear to be converting to Christianity anytime soon:

“I felt mortified, embarrassed, humiliated even. I felt hurt, and a bit heartbroken,” the waitress said to her friend. “It is a bit disheartening and discouraging that things like this happen at this day and age.”

She added that she’s not married, nor does she have children, but that her boyfriend is extremely supportive of the work she does as she works to try and further her education.

This only happens with people who think sharing Jesus with their servers is what they need the most — instead of leaving a tip, which would help them much more. How awful.

October 18, 2016
Bill Maher: I Won't Run for Public Office Because Being an Atheist is the “Ultimate Deal Breaker”
Next Post

October 18, 2016 Teresa MacBain, the Pastor Who Became an Atheist, Has Found God Once Again
Browse Our Archives
What Are Your Thoughts?leave a comment