Clades: An Educational Evolution-Based Card Game for the Whole Family

A couple of years ago, game designer Jonathan Tweet and illustrator Karen Lewis began raising funds for a children’s book called Grandmother Fish to teach the basic concepts of evolution to pre-schoolers.

Their latest project is a card game for the whole family that involves matching up animals based on their evolutionary relationships. It’s appropriately called “Clades“: 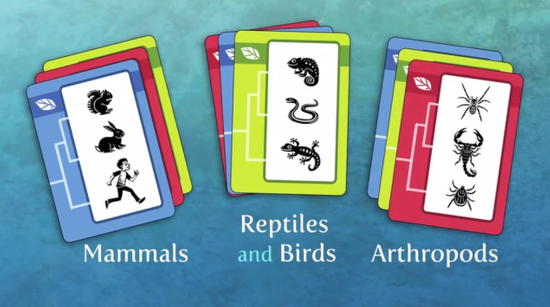 A clade is a complete branch of the evolutionary family tree. That means it’s an ancestral population and every population that descended from it, with no other populations included. Scientists used to classify animals according to their characteristics. Birds were in a separate class from reptiles. Now scientists classify animals according to their evolutionary descent, that is, what clades they are in. Birds, it turns out, are descended from prehistoric reptiles. Reptiles and birds together form a clade called Sauropsida (“lizard faces”).

Players try to spot matches of three cards among the cards that are face-up on the table. Each player also has a personal card that only they can use to make a match. You collect the cards that you match, and whoever has the most cards collected at the end of the game is the winner. You earn extra cards if your match is a “clade match”, such as all mammals, and bonus cards give you an extra boost as well.

As far as creators go, Tweet and Lewis are reliable, send out their product in time, and are the type of people you’ll be proud to support. They’re already on the verge of hitting their fundraising goal, but the stretch goals include some excellent perks (including a “Prehistoric” version of the same game).

You can get in on the ground floor right here.

October 19, 2016 This is Why We Must Fight for a Secular World
Browse Our Archives
What Are Your Thoughts?leave a comment