Bill Maher: I Won’t Run for Public Office Because Being an Atheist is the “Ultimate Deal Breaker” October 18, 2016 Hemant Mehta

Bill Maher: I Won’t Run for Public Office Because Being an Atheist is the “Ultimate Deal Breaker”

Bill Maher did an interview with Fareed Zakaria GPS during which he was asked if, as a celebrity with opinions, he’d ever run for public office a la Donald Trump.

Maher responded that he wasn’t interested, but even if he wanted to run, his open atheism would likely be a dealbreaker with American voters. 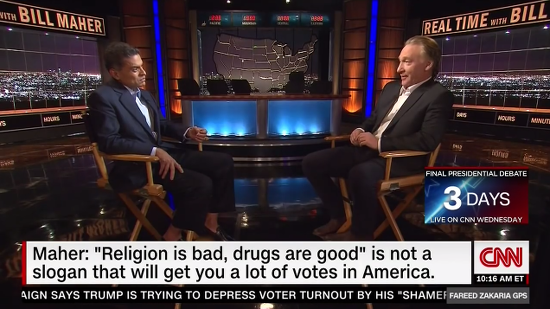 ZAKARIA: … the power of celebrity is extraordinary. [Donald Trump] has this ability to bypass conventional media. He’s got between Facebook and Twitter, he claims 25 million — I haven’t checked it — followers.

I mean, I am serious. You… have, in that same world, you’ve got five, six million Twitter followers. Have you ever thought about the fact that you could probably run? You have more name recognition than any politician.

MAHER: I know, but it’s my views. Interesting, I could run more reasonably than I could ten years ago. But my standard answer to that was always “I think religion is bad and drugs are good.” And that is not a slogan that will probably get you a lot of votes in America. People are rather conservative when they go in the voting booth.

Even liberals. I mean, not necessarily ideologically but they want someone stable. I mean, we will see. If Trump gets elected, this goes out the window. But just being an atheist, I mean, right there, that’s like the ultimate deal breaker. There’s polling on this in America. They will vote for anybody before an atheist. I’m talking about the categories that have never been elected: a Jew, homosexual, vegetarian — they hate vegetarians and they will even vote a vegetarian before an atheist. That’s rock bottom. So, yeah, nor would I ever want to.

He’s not entirely wrong that his anti-theism could make it impossible to convince independents (and some liberals as well) that he’s interested in protecting church/state separation, not shutting down their churches. But he may be exaggerating the impact his atheism could have.

That Gallup poll he referenced actually showed that 58% of Americans would now consider voting for an atheist. That’s a low number, to be sure, but it’s more than half the country and it’s not even the lowest category on the list anymore; that designation went to “Socialist” with 47% support.

But I can tell you what will happen the next time they run this poll: Because of the success of Bernie Sanders, the word “Socialist” won’t be as scary anymore. More people will be willing to vote for a Socialist for President. And maybe if Maher ran, atheism would lose a lot of that stigma, too.

The problem is that people still have a negative connotation of what it means to be an atheist. They assume we’re immoral, unlikable, and out to get them. They’re wrong about all of that, but the perception still has an impact.

But even that’s changing. If you ask people who are 18-29 if they’d consider voting for an atheist, the percent jumps to 75% compared to only 48% for people 65 and older. 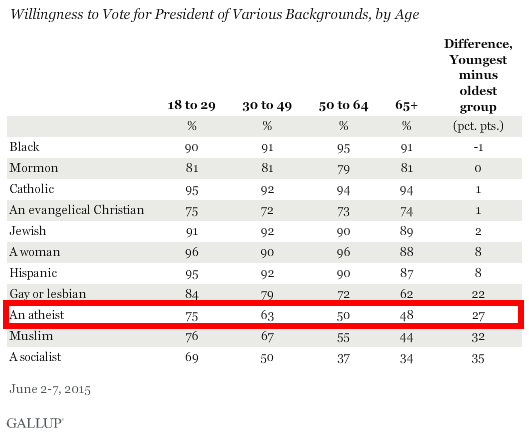 Atheist politicians may be a rare breed, but that’s not going to stay the case for very long.

That’s why I’m thrilled that more open atheists are running for state and federal offices this year than ever before. Some of them appear likely to win, but even the ones who don’t are helping overturn those stereotypes.

Maher may never run for public office, but doing so as an open atheist isn’t as uphill a climb as he may imagine. Not for much longer.