The last time we heard about Atheists in Kenya, the government said they couldn’t be a registered organization (akin to getting non-profit status in the United States). However, that hasn’t stopped the group from raising awareness of how religion gets far more respect than it deserves.

Their latest gambit is arguing that the National Anthem in the secular country shouldn’t have the word “God” in the first stanza. The song begins with the lines, “O God of all creation, Bless this our land and nation.” 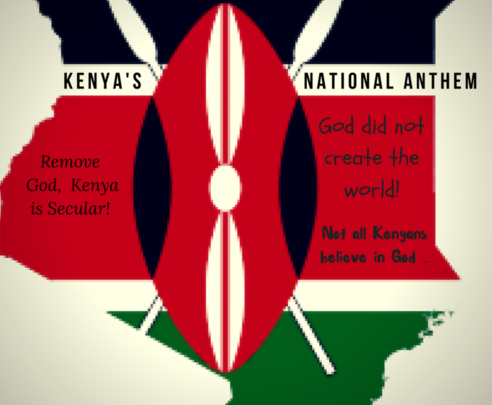 “As non-believers, we feel that the National Anthem is not representative of us, and goes against the spirit of the Kenyan Constitution. Removing ‘God’ from the National Anthem will make it inclusive,” Harrison Mumia, President of Atheists in Kenya, said in a statement.

“Atheists want to feel proud when we sing or listen to the national anthem. This pride must arise from a sense of unity with shared values and ideals. The word ‘God’ disenfranchises atheists from this unified ideal,” Mr Mumia said.

He’s absolutely right about that. A nation that claims to keep church and state separate shouldn’t be promoting God in its Anthem.

Mumia created an online petition for Kenyans who’d like to see the Anthem change. That petition will later be presented to Parliament (which, oddly enough, also has its own prayer to God).

Will anything change? It’s doubtful. But nothing will ever change if people don’t even know there’s a problem, and the atheists have every intention of making sure people are aware of the issue.