If you take a careful look at the way Donald Trump is speaking at his recent rallies — which requires you to take a break from banging your head against the wall — you’ll notice that Trump doesn’t sound all that different from a Christian preacher who acts like the world is coming to an end soon. 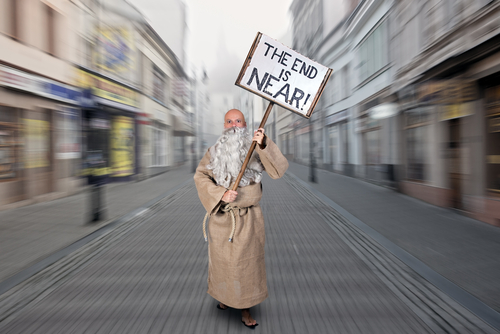 Trump supporters respond with mass assent to his words and actions. They don’t question or discuss behaviors that in the past would be alarming to Americans — his remarks that are racist or misogynist, his shady dealings with Trump University, or his past obsession with the birther movement.

In the Bible and in fundamentalist Christianity, one does not question the authority of God. Obedience is by far the highest virtue. One of the earliest stories in the Bible exalts Abraham for obeying God enough to sacrifice his son Isaac (Genesis 22). This story is told in church as an example instead of the abhorrent morality it represents. Other stories of obedience and disobedience permeate the Bible (Book of Jonah, Acts 5:1-11).

Thinking for oneself is not permitted. Nor do we see people thinking for themselves at Trump rallies.

There’s plenty more where that came from right here.

(Image via Shutterstock. Thanks to Lynn for the link)