Gay Texan Celebrates Anniversary of His Former Megachurch Kicking Him Out

More than a year ago, Jason Thomas was told he could no longer be a member of Watermark Community Church in Dallas, Texas, because he was gay and (wait for it) didn’t feel ashamed about it. In fact, he was dating another guy as if his sexual orientation was something perfectly normal, and the church couldn’t handle it. So they kicked him out via a letter. 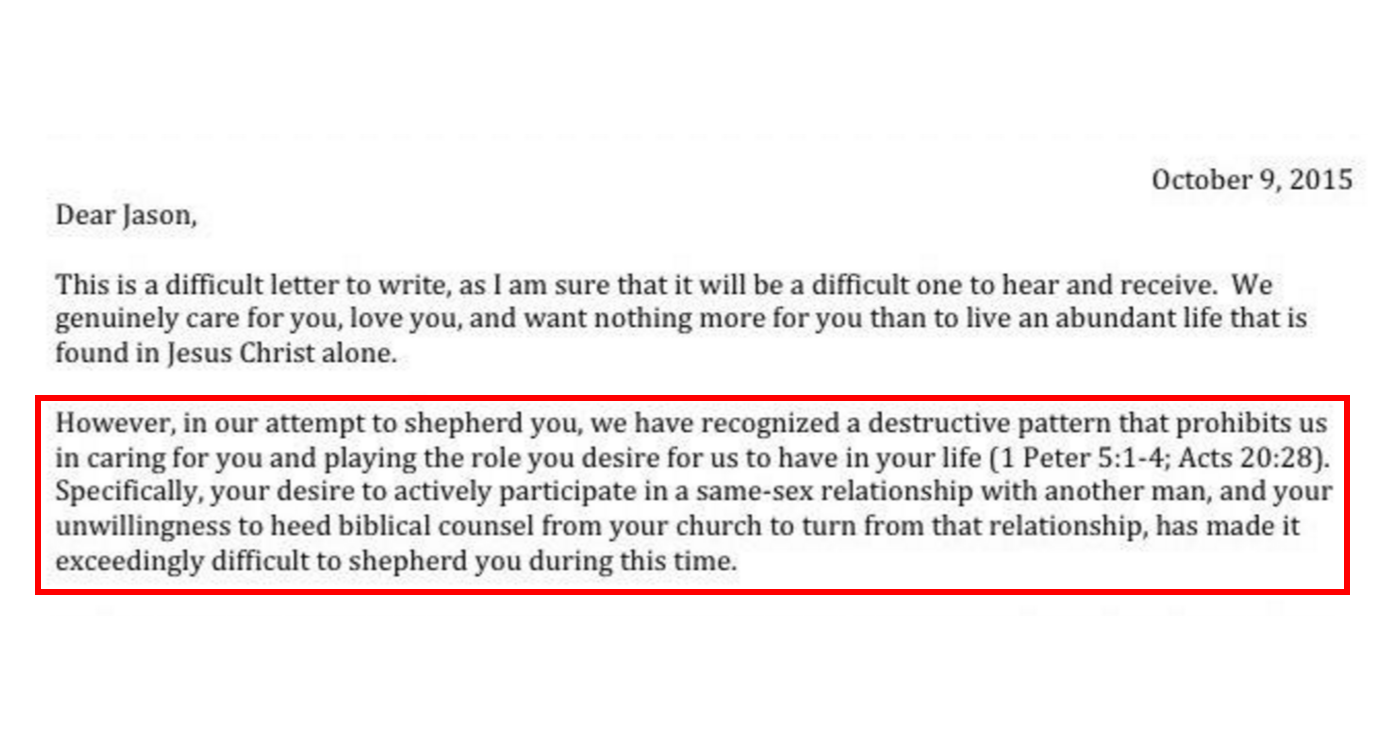 … your desire to actively participate in a same-sex relationship with another man, and your unwillingness to heed biblical counsel from your church to turn from that relationship, has made it exceedingly difficult to shepherd you during this time.

The church elders also urged him to “meet with a Watermark staff member who shares in the same struggle (same sex attraction) who has found freedom, healing, and victory…” Because your homosexuality is just a switch you can turn off.

That, again, was a year ago. And Jason marked the occasion by posting that letter on Facebook along with a message:

I spent years in your church battling against my homosexuality. I believed with all my heart that God would change me; I prayed for change almost daily. But when I wasn’t able to change, you turned your back on me.

You say our “sin” is not unique, but you treat us in a unique manner; this is unacceptable behavior. We are actual people that have actual feelings.

Thank you for removing yourself from my life! I am who God made me to be. I cannot change my sexual orientation and nor would I want to. I now have internal peace and happiness unlike ever before.

Part of me wanted to know why Jason would have attended the church in the first place, but the answer to that is obvious. It’s the same reason many Republicans still won’t denounce Donald Trump. Besides all the obvious awfulness that everyone else sees, he believes there’s something worthwhile at the core, and he held out hope that they would all return to what brought him into the church in the first place.

That never happened. Their bigotry overcame any sense of principle.

Jacquielynn Floyd, a columnist for the Dallas Morning News, had a perfect response to his Facebook post:

As far as I can tell, Watermark didn’t deserve Jason Thomas. I don’t know the guy, but from a quick look at his FB page and the testimony of his friends, he’s a kind, generous man; a civic volunteer; a spiritual person who cares deeply for others and community.

That’s the problem with evangelical Christianity for you: By enforcing these despicable policies, they’re alienating the most tolerant, decent people in their churches. Those people may leave Christianity altogether, but their first step will be leaving the church (if they aren’t kicked out first). That makes the people who remain even more homogenous, more anti-gay, and more unwilling to change and adapt.

What we need, however, are more Christians to follow people like Jason out the door. Anyone who remains at Watermark is sending a message that they approve of his treatment. If they believe the church is wrong about this, the only way the elders will ever learn is if those people leave the church and take their money with them.

(Thanks to @LukeMorris for the link)

October 15, 2016 Why Doesn't Anyone Believe in an "Evil" God?
Browse Our Archives
What Are Your Thoughts?leave a comment