A Mississippi High School Football Coach is the Latest to Baptize a Player While on the Clock October 14, 2016 Hemant Mehta

What is it with public high school football coaches who think performing baptisms is part of the job description?

The latest example comes from Newton High School in Mississippi, where football coach Ryan Smith “organized and performed a baptism” on a player. 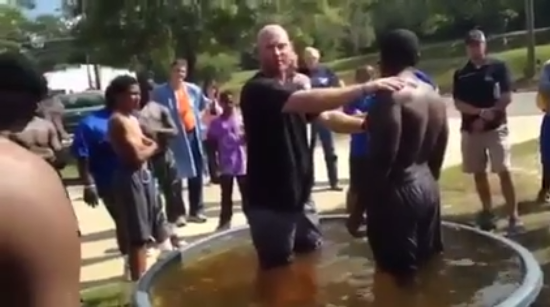 According to a letter sent to the District’s superintendent by Freedom From Religion Foundation attorney Sam Grover,

The baptism event was held with the entire football team present. Prior to performing the ritual, Coach Smith gave religious remarks to the team about how “God” was calling to him, what scripture says about being a man, and stated that accepting Christ as your savior is “a decision that a man is supposed to make.”

… By leading and participating in these events, Coach Smith sends the message that coaching staff, and by extension the school district, value Christian players above players who practice a minority religion or no religion at all.

And just to state the obvious, nobody needs God to be a “real man.” God doesn’t make you better, kinder, more tolerant, or more decent — just look at the “godly” candidate the evangelical Right supports in this election. In some cases, devout belief will lead you in the opposite direction.

FFRF is asking for assurances from the District that this won’t happen again and that coaches and staffers are “instructed that they can neither organize nor participate in religious activities with students” while on the clock.

(Edit: I misidentified the location of the school. It has been corrected in the article.)

October 14, 2016
The Christian Right Wants to Protect Women and Children From Who Again?
Next Post

October 15, 2016 Neil deGrasse Tyson Sets Up the Joke and J.K. Rowling Spikes It
Browse Our Archives
What Are Your Thoughts?leave a comment