Liberty University Students Defy Jerry Falwell, Jr.: “We Want Nothing To Do” With Donald Trump

One of Donald Trump’s most prominent supporters in the evangelical world — since the beginning of his campaign, through the racism, bigotry, and sexual harassment allegations — has been Jerry Falwell, Jr., the President of Liberty University.

Running mate Mike Pence spoke at the school earlier today urging Christians to forgive Trump for bragging about grabbing women “by the pussy.” And Falwell himself said the other day that the Access Hollywood tape was leaked to the press by “establishment Republicans.” It’s a very cozy relationship between the man, the school, and the Trump campaign… even if Falwell insists he’s speaking only for himself.

Tonight, a group of students calling themselves “Liberty United Against Trump” issued a statement saying they did not share the political views of their President and were embarrassed by Falwell for using the school’s credibility to boost Trump’s campaign: 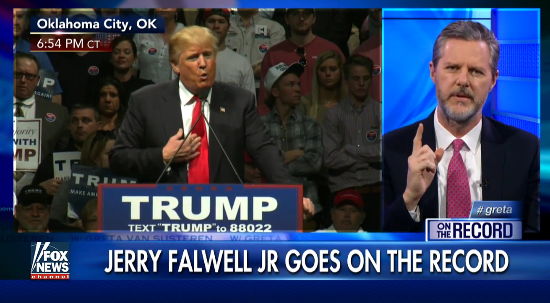 In the months since Jerry Falwell Jr. endorsed him, Donald Trump has been inexorably associated with Liberty University. We are Liberty students who are disappointed with President Falwell’s endorsement and are tired of being associated with one of the worst presidential candidates in American history. Donald Trump does not represent our values and we want nothing to do with him.

A majority of Liberty students, faculty, and staff feel as we do. Donald Trump received a pitiful 90 votes from Liberty students in Virginia’s primary election, a colossal rejection of his campaign. Nevertheless, President Falwell eagerly uses his national platform to advocate for Donald Trump. While he occasionally clarifies that supporting Trump is not the official position of Liberty University, he knows it is his title of president of the largest Christian university in the world that gives him political credentials.

Associating any politician with Christianity is damaging to the Gospel of Jesus Christ. But Donald Trump is not just any politician. He has made his name by maligning others and bragging about his sins. Not only is Donald Trump a bad candidate for president, he is actively promoting the very things that we as Christians ought to oppose.

A recently uncovered tape revealed his comments bragging about sexually assaulting women. Any faculty or staff member at Liberty would be terminated for such comments, and yet when Donald Trump makes them, President Falwell rushes eagerly to his defense — taking the name “Liberty University” with him. “We’re all sinners,” Falwell told the media, as if sexual assault is a shoulder-shrugging issue rather than an atrocity which plagues college campuses across America, including our own.

It is not enough to criticize these kinds of comments. We must make clear to the world that while everyone is a sinner and everyone can be forgiven, a man who constantly and proudly speaks evil does not deserve our support for the nation’s highest office.

Jesus tells a story in the Bible about a man who tries to remove a speck of dust from his brother’s eye, while he has a log stuck in his own. “You hypocrite,” Jesus says, “first take the log out of your own eye, and then you will see clearly to take the speck out of your brother’s eye.”

We Liberty students are often told to support Donald Trump because the other leading candidate is a bad option. Perhaps this is true. But the only candidate who is directly associated with Liberty University is Donald Trump.

Because our president has led the world to believe that Liberty University supports Donald Trump, we students must take it upon ourselves to make clear that Donald Trump is absolutely opposed to what we believe, and does not have our support.

We are not proclaiming our opposition to Donald Trump out of bitterness, but out of a desire to regain the integrity of our school. While our president Jerry Falwell Jr. tours the country championing the log in his eye, we want the world to know how many students oppose him. We don’t want to champion Donald Trump; we want only to be champions for Christ.

It’s unclear how many students make up this group, but Tyler McNally, who first tweeted that statement, is indeed a student there, and he’s been a thorn in Falwell’s side all year. According to one report, Falwell even blocked him on Twitter.

It’s rare for me to say this, but these students at Liberty know what they’re talking about. If only Falwell would dare to listen to the very people he represents instead of pulling a Chris Christie and promoting Trump perhaps in the hopes that the support might lead to something bigger and better if he makes it to the White House.