This week, Channel 4 aired illusionist Derren Brown‘s latest special Miracle. It includes tricks in which Brown, impersonating a faith healer, restores one woman’s horrible eyesight before temporarily screwing up the eyesight of a man who could see just fine.

A copy of the show exists on YouTube (not for long, I’m sure) and that segment begins around the 55:30 mark: 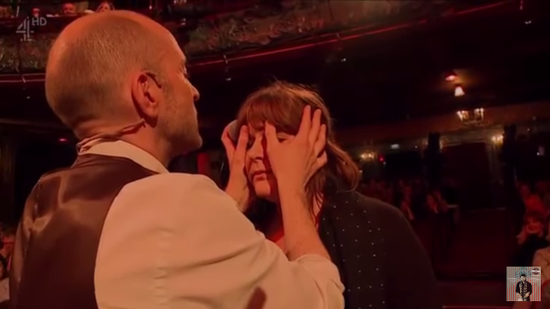 It’s a neat trick — I have no clue if it’s merely the power of suggestion or something else is going on — and it also exposes the moral bankruptcy of faith healers. They use the same language, really play up what’s about to happen, and get the crowd into it… right before “proving” they’ve healed someone. (I promise you no eye doctor is about to confirm that the woman in Brown’s special has been cured, just like you’ll never see Benny Hinn release his victims’ before and after medical reports.

The special brought back a lot of memories for atheist blogger Sophie Bell, who used to attend a church where faith healings were common. She began questioning her faith when she finally started to understand the tricks:

At some point, I came to realise that the biggest healings, the most remarkable events, were ones that happened in far away places, in circumstances that were never or rarely corroborated. I heard from visiting preachers about how they’d raised a dead person to life in Africa or Siberia. I heard stories about big healings; people being cured of deafness or blindness or getting up and walking. But these things never seemed to happen close to home…

To [church members who witness these “healings” up close], this is “evidence”, and if you’d only attend their church, you’d see it with your own eyes, too. It can be really hard to talk people round from this way of thinking.

But seeing is believing. So instead of talk, Derren shows them that there is nothing supernatural about their experiences by replicating their experiences perfectly. In doing so, will he change any minds about miracles? I think so.

It’s not the first time Brown has exposed the tricks of these faith-based con artists either. Be sure to check out his special Miracles for Sale.