Hate Preacher Steven Anderson in BBC Documentary: Gays Are Pedophiles Who Should “Kill Themselves”

I cringed a little bit when I learned that another country had just aired a documentary about the United States… but thankfully, it wasn’t about Donald Trump. It was about vile people who aren’t close to getting their hands on the nuclear codes: Hate-preachers like Steven Anderson.

The BBC’s America’s Hate Preachers, directed by Hannah Livingston, is all about why Bible-thumpers who celebrate the deaths of gays and lesbians, the subjugation of women, and (I assume) their testosterone levels have any sort of following whatsoever. 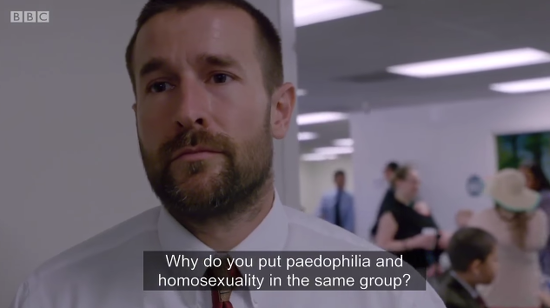 In the first few minutes, one exchange really sets the tone for the whole film:

ANDERSON: To normal people, homosexuality [and] pedophilia are disgusting. To a normal person.

LIVINGSTON: Why do you put pedophilia and homosexuality in the same group?

LIVINGSTON: That’s blatantly not true, though!

ANDERSON: It is true! That’s reality. Even if you don’t think it’s reality…

LIVINGSTON: What do you think homosexuals should do, then?

ANDERSON: Kill themselves, as far as I’m concerned, because they’re horrible, wicked people. They’re just gonna keep molesting and destroying people. So I don’t have any advice for homosexuals, except to put a bullet in your own head so that you don’t molest my kids or anyone else’s kids.

Livingston also speaks with Anderson’s wife, gets him on the record about how the U.S. government perpetrated the 9/11 attacks, and talks to other hateful street preachers.

This is what evangelical Christianity represents to people around the world. We’re a nation where hate-preachers like Anderson can not just rise up but get a large following — and if you think he’s just an extreme example, remember that we’re weeks away from possibly electing a President whose own hate is propped up by his mainstream evangelical Christian base.

Anderson is hardly an anomaly when another hatemonger could soon be in the White House.

***Update***: Anderson has posted a reaction to the documentary, saying he liked it when it focused on his church, but criticizing it for including those other street-preaching “goofballs”:

(Thanks to Mart for the link)

October 12, 2016
Campus Preacher Arrested After Elbowing University of Georgia Student in the Face
Next Post

October 12, 2016 Christian Athlete Tim Tebow Didn't Do Anything "Miraculous" at a Baseball Game
Browse Our Archives
What Are Your Thoughts?leave a comment