Once again, the most Christian of athletes, Tim Tebow, is getting credit for something he didn’t do. 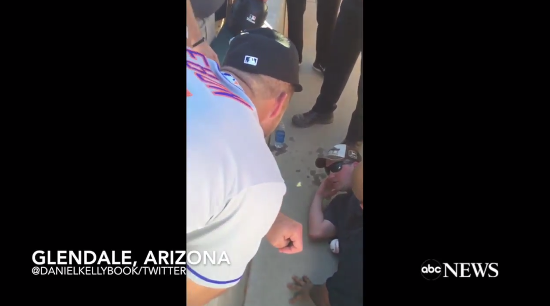 At a baseball game yesterday for the Scottsdale Scorpions (part of the Arizona Fall League), a fan went into a seizure and stopped moving. Tebow, according to reports, “placed his hands on the man and said a prayer before emergency personnel arrived on the scene.” Needless to say the man is doing better now and Tebow, not the emergency personnel, is getting much of the credit.

This went further than a prayer. After the man regained consciousness, Tebow sat and talked with him for 15 minutes, according to USA Today. Tebow comforted the man, telling him paramedics are “going to take good care of you, buddy.” In an amusing twist, the man turned out to be a huge Georgia Bulldogs fan. Tebow attended the University of Florida, one of Georgia’s biggest rivals.

That’s what a nice person does, and Tebow, by all accounts, is a decent guy. But he’s not a miracle worker.

It’s also not the first time he’s received credit for reviving a stranger. Back in June, when an elderly man experienced heart problems on a plane, Tebow was one of many people (including a “young medical professional” who actually performed CPR on the man) who stayed with him until they could land. The elderly man stayed alive because of the medical experts, but Tebow scored plenty of headlines.

Just to be clear, I don’t think any of this is his fault. He’s a celebrity who’s outspoken about his faith, and he has an urge to help people when he can. There’s nothing wrong with that. But it’s foolish for the media to act like he’s genuinely contributing to the healing of these patients. Given the choice between Tebow and doctors, rational people are going with the doctors every time.

Make no mistake, though. Tebow’s prayers had nothing to do with their recovery. No matter what people say. Chris Cwik of Yahoo Sports has the right idea:

… classifying either scenario as a “miracle” falls on the side of hyperbole. But we should acknowledge that Tebow does seem like an individual who cares, and is willing to come to the aid of those in need. No matter how you feel about Tebow, this appeared to be a moment of genuine kindness. It’s tough to be snarky about that.

But try telling that to people who think he’s some sort of faith healer. If he had that sort of power, the least he could’ve done is use it on himself when he was in the NFL. Or in yesterday’s game:

The 29-year-old outfielder went 0-for-3, with three groundouts. He also crashed into the outfield wall face-first while trying to catch a fly ball.

God’s just teasing him at this point.

October 12, 2016
Hate Preacher Steven Anderson in BBC Documentary: Gays Are Pedophiles Who Should "Kill Themselves"
Next Post