When campus preachers come to your school and begin screaming about whores and hell and sodomy and homosexuality, it’s very tempting to confront them. You want to get in their faces, fight them, and yell right back… but that’s exactly what they want. Their whole goal is to provoke. A student getting violent just feeds their martyr complex.

But at the University of Georgia, a student did the opposite by getting the preacher to blink first. Keaton Law began screaming at Brother Ross Jackson only to receive an elbow to the face. That prompted police to escort Jackson off campus: 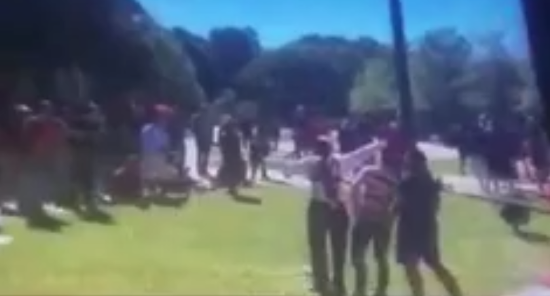 “This man came to our campus yesterday with a couple of his buddies claiming to be saints, and they were just preaching hate,” Law said. “And I don’t think that’s acceptable. We shouldn’t be subjected to that kind of verbal abuse all day.”

Law said since he only had one class today, he wanted to ensure the preachers were removed.

“I made it my mission. I said ‘I’m going to drown them out. I’m going to talk over them,'” he said. “Eventually it just became too much for him and he elbowed me in the face and it pushed me.”

“At that point he had broken the law,” he said. “And my mission was complete.”

It’s a little odd to see a student go to such lengths to remove a preacher from campus, because it’s not like they’re going to stop coming. This guy might not return but others will — including Jackson’s wife and kids who were there preaching with him. So what exactly did Law accomplish by stooping down to the preacher’s level of dialogue? Shutting him up doesn’t give students the chance to understand why his views are so abhorrent and wrong.

That’s why I’m a much bigger fan of the protests that include mockery and pride from a distance. It fights hate with love, sends the message that you don’t need God — especially those preachers’ God — to be good, and gets other students involved in the mix.

October 12, 2016
Survivor of Attack by Islamic Extremists Thanks the Qur'an for "Making Me Such a Good Atheist"
Next Post