Pat Robertson, speaking on The 700 Club yesterday, had an incredibly flippant response to Donald Trump‘s caught-on-a-hot-mic moment in which he bragged about being famous enough to get away with forcing himself onto women. 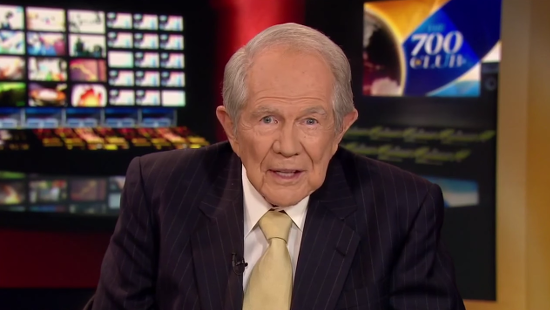 “A guy does something 11 years ago, it was a conversation in Hollywood where he’s trying to look like he’s macho,” Robertson said. “And 11 years after that they surface it from The Washington Post or whatever, bring it out within 30 days or so of the election and this is supposed to be the death blow and everybody writes him off, ‘Okay, he’s dead, now you’ve got to get out of the way and let Mike Pence run the campaign.’”

You know, it’s frustrating enough that people outside the country are judging us because half of us nominated a character from Idiocracy for President.

It also makes me angry. There are millions of Americans seeking to put a man in the Oval Office who, if I were to be alone with him, I couldn’t trust not to try and kiss me non-consensually and grab my genitalia.

I’m embarrassed that so many Americans are willfully perpetuating this idea that sexual assault is okay to brag about — or even to joke about. That’s especially true of Christians, who often claim their faith puts them on the moral high ground.

Maybe I shouldn’t be that surprised because the Bible is chock full of stories of rape. In Judges 19, a dad gives his daughter and his guest’s concubine to a horde of men to be raped and killed. In Genesis 19, Lot offers his two virgin daughters to men to be raped. In neither case are the rapes condemned.

No one expects Trump to have read the Bible (even if it’s his favorite book), but the Bible’s rather lenient stance on rape notwithstanding, why would Robertson condone this reprehensible behavior?

Saying it’s merely a (59-year-old) man trying to be “macho” is as pathetic an excuse as saying it’s just “locker room talk.” Even if they think this is how men act in private, it’s not something to be condoned or excused.

If Trump’s comments are dismissed by Robertson, what’s next? Because there are plenty of crimes — murder and rape included — committed by people trying to assert their manliness. Where does Robertson draw the line?

Or does it matter which political party he belongs to?

Robertson was not nearly as forgiving of Bill Clinton‘s “macho” behaviors, once accusing the former President of turning the White House into a “playpen for the sexual freedom of the poster child of the 1960s.” He also said of David Petraeus, who served under President Obama as head of the CIA (though he himself is a Republican), that his well-publicized affair occurred because “He’s a man.”

The die-hard Trump fans will stick to their candidate no matter what, but the continued support from many Christian leaders makes it so much easier for them.

To be sure, there are Christian leaders who don’t support Trump and many evangelicals denouncing his entire campaign. One well-known pastor, Max Lucado, said it well:

Such insensitivities wouldn’t be acceptable even for a middle school student body election. But for the Oval Office? And to do so while brandishing a Bible and boasting of his Christian faith?

… I am protective of the Christian faith. If a public personality calls on Christ one day and calls someone a “bimbo” the next, is something not awry? And to do so, not once, but repeatedly? Unrepentantly? Unapologetically? Can we not expect a tone that would set a good example for our children? We stand against bullying in schools. Shouldn’t we do the same in presidential politics?

Kudos to the Christian leaders who admonish Trump’s lewd comments — not just over the past week, but since the beginning of his campaign.

October 11, 2016
Even Christians Ought to Agree That These Verses from the Qur'an Are Despicable
Next Post