Jerry Falwell, Jr., the President of Liberty University, is in a bind. As an evangelical leader, he really wants to back Donald Trump, in the hopes that a Republican President and Congress can get him his preferred Supreme Court lineup. But that means backing someone who brags about sexual assault, doesn’t take his marriage vows seriously, doesn’t actually give a damn about stopping abortion or overturning LGBT rights, and lies dozens of times in any given day. 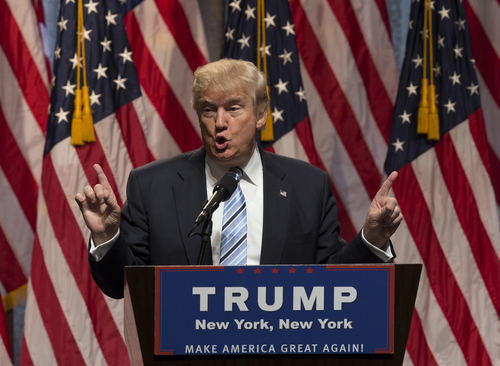 He could also abandon Trump and make the point that standing by your principles is more important than short-term political gain.

But this is Jerry Falwell, not a man of principle. Which makes him one of many evangelical leaders who’s not about to jump ship.

So how does he respond to the recent video in which Trump brags about grabbing women “by the pussy” and making advances on them without their consent?

He denounced Trump’s words… and then blamed establishment Republicans for leaking the tape to the press.

“I think this whole videotape thing was planned, I think it was timed, I think it might have even been a conspiracy among the establishment Republicans who’ve known about it for weeks and who tried to time it to do the maximum damage to Donald Trump,” Falwell told reporter Rita Cosby on her podcast.

Does he have any proof to back up his claim? Of course not. This is someone who believes in talking snakes and a man rising from the dead. Proof isn’t part of his vocabulary.

Falwell declined to name names, but he said he has independent information that Republican establishment members who reluctantly endorsed Trump released the tape to “slither out of the endorsements and I think it backfired on them.”

Sure he does… Or maybe it’s more likely that someone with access to the tape was frustrated that NBC wasn’t moving fast enough on the story, so he leaked it to the Washington Post‘s David Fahrenthold, who needed a mere five hours from the first phone call until an article about the tape was first posted online.

“I think a lot of the establishment Republicans have been conspiring together for the last six weeks or more, and I think it’s all a plan,” he said, citing “sources I believe are reliable. It’s nothing I can prove. It wasn’t a coincidence it came out right before Trump was supposed to appear with [House Speaker] Paul Ryan at a rally and it conveniently gave Paul Ryan a way to disinvite Trump. I can’t prove any of it, it’s my opinion.”

That’s what a bullshit artist sounds like. Honesty and integrity go right out the window if it means a Republican — any Republican — might get into the White House.

By the way, even if he were right, so what?! The source of the videotape isn’t the story here; it’s the content. And Falwell gives only a cursory dismissal of what Trump said. What he doesn’t say is, “Those comments were reprehensible and I will not stand with anyone who thinks sexual assault is something to boast about.”

Liberty University’s motto is “Knowledge Aflame.” That seems appropriate here, give that Falwell is setting knowledge on fire and replacing it with a baseless conspiracy theory.