Donald Trump is so desperate to insult Hillary Clinton any way he can that, last night, he accused her of being Satan. 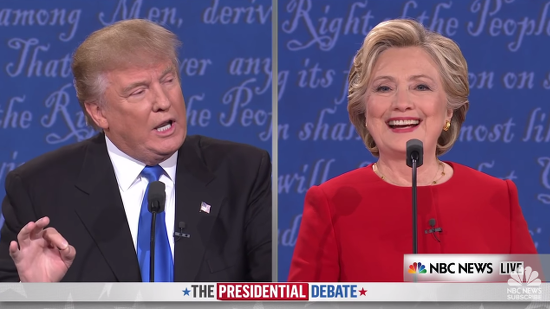 Bernie Sanders… he never had a chance, and I was so surprised to see him sign on with the Devil.

It’s a line and idea he used back in August, and it makes no more sense now.

The Devil’s charitable foundation wouldn’t be saving lives across the world.

The Devil wouldn’t have ever taught Sunday School classes for adults.

But it’s a phrase that Trump’s surrogates and supporters have repeatedly used, maybe as a way to rile up their evangelical base. Don’t make the mistake of thinking it’s not literal, either. When you say “she the Devil” many times over, it’s clear that we’re not talking about making a deal with a metaphorical one.

American Family Radio host Bryan Fischer said in August that Clinton was “motivated by the spirit of the Antichrist.” Dr. Ben Carson said during the Republican National Convention that Americans should not be “willing to elect someone as President who has as their role model, somebody who acknowledges Lucifer.” And Colorado State Rep. Gordon Klingenschmitt accused her in Spetember of having a “demonic evil spirit of hatred.”

This sort of attack can only work on people who are gullible enough to believe in a literal Devil and ignorant enough to think she’s running for President to stick it to Christians. If you disagree with her policies, fine, but even for Trump, this is a low blow.

If he wanted to compare someone to a supernatural villain, he could look in a mirror.