Jill Stein: Swing-State Voters Should Still Vote for Me Even If It Means Donald Trump Gets Elected October 9, 2016 Bo Gardiner

Jill Stein: Swing-State Voters Should Still Vote for Me Even If It Means Donald Trump Gets Elected

Green Party presidential candidate Dr. Jill Stein seems completely detached from reality — and she could pose a serious problem in the “eleven states where the difference between [Donald] Trump and [Hillary] Clinton is less than the sum of likely voters who say that they support either” of the third party candidates. 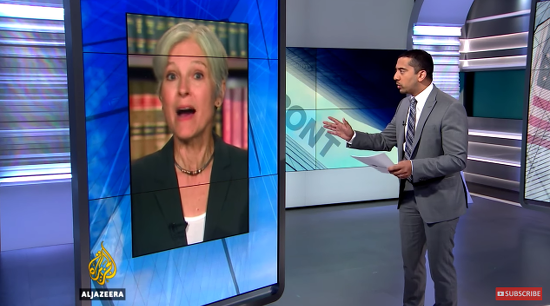 Hasan called her out for:

STEIN: Well, you know, what the American people would rather see is neither of them, because they are rejecting those two candidates who are being shoved down their throats by the corporate media…

Stein is now too caught up in the web of self-delusion she has spun to advise young swing-state voters (or anyone else) on how to help the nation. She repeatedly refused to answer Hasan’s questions, instead parroting her usual hyperbole:

STEIN: It’s not a matter of not liking them. It’s a matter that in this election we’re not just deciding what kind of a future we will have but whether we will have a future at all or not…

My expectations for Trump were always subzero. But I’ve campaigned for Greens in the past, and Stein also upsets me, but it’s more disappointment: her self-deception, irresponsibility, science denialism, and apathy toward the lasting damage to real lives and the environment she could wreak. She pops up out of nowhere every four years — only in the presidential race and never down-ticket — to make a point, precisely when she can do the least good and the most harm.

I’d hoped Trump’s despicable behavior coupled with a looming Election Day would rain cold reality and humility upon her. Maybe she’d acquire more compassion for Trump’s human targets, announce she was happy the Greens had been heard, and redirect her party’s attention to state and local races.

So how is she sounding now with the election exactly one month away? Unmoved, oblivious, and belligerent:

HASAN: I want you to listen to Noam Chomsky, who I interviewed earlier this year, who’s a supporter of yours. This is what he said when I asked him whether he’d vote in a swing state for Hillary Clinton as the lesser of two evils [plays video]:

CHOMSKY: I didn’t like Obama but I said exactly the same thing.

HASAN: Hillary has your vote if you were in a swing state?

CHOMSKY: Well, let’s put it that way: my vote would be against the Republican candidate.

HASAN: Do you agree, Jill Stein, with Noam Chomsky, that if you’re in a swing state like Pennsylvania, where you are now, that could determine the next election result, you should vote for Hillary as a progressive in order to stop the lesser of two evils, the very right-wing — some would say far right-wing — candidate Donald Trump? Surely that’s a no-brainer?

STEIN: It will be horrific if Trump wins, but I am not at all reassured by the policies of Hillary Clinton… Democracy needs an affirmative agenda…

STEIN: … Hillary Clinton and Donald Trump are not realistic: one will support coal, the other will support fracking…

HASAN: … OK, but one of them is going to be the next president. Most Americans are going to choose between those two people, and if they were to ask you, “Jill Stein, I’m in a swing state, I’m worried about Donald Trump, like Noam Chomsky, should I vote for Hillary Clinton to stop Trump?” What is your advice to that voter?

STEIN: You should vote for our future…

HASAN: So you should not vote Hillary to stop Trump?

She’s unable to see the rationality in Chomsky’s words, or in those of Bernie Sanders, whom she proceeded to insult:

HASAN: … Bernie Sanders… when he says now is not the time for a protest vote, now is the time to get behind people who want to stop Donald Trump, i.e. Hillary Clinton, and he says, “If you guys want to go and run for Congress or run for governorship, fine, but now is the time to stop Donald Trump from being president.” This guy who is promising to ban Muslims from America, deport 11 million quote unquote illegal immigrants, kill the families of terror suspects, bring back water boarding or worse, incites violence against all sorts of protesters… when he says you’re just a protest vote, it’s time to stop Donald Trump, is he wrong as well?

STEIN: As you know as he said himself, he is a man, he is not the movement. This is a time for a movement, and that movement is not drinking the Kool-Aid. Some are, but many are not going into Hillary’s camp… Hillary Clinton is not different enough from Donald Trump that she or the Democratic Party are going to save your job, save your life, or save the planet.

And a vote for Stein will? How does that work?

HASAN: When Donald Trump says as he did in July, I think, “A vote for Stein would be good, because I figure anyone voting for Stein is going to be for Hillary,” does it make you uncomfortable that he’s so keen on your candidacy for obviously selfish reasons?

STEIN: … Would you say the same thing… would you tell Gary Johnson to also get out of the race because he happens to be drawing more votes from Hillary?

That last line echoes her constant themes of paranoia and victimhood. Is it honest delusion or dishonest spin to suggest people aren’t raising this issue about Johnson, even while it applies less to him since Libertarians typically draw votes equally from both parties?

HASAN: Yes. [You almost hear a “Duh.”] Many people would say that, in order to stop Trump, candidates should get out of the way.

STEIN: So what you are saying is that we should only have two official political parties in this country…

Just… wow. Yeah, that’s just what Hasan’s saying. That’s totally what Sanders and Chomsky are trying to tell her, too… If she had a realistic chance to win, we’d be having a different conversation. But she’s not, and that means the only role she can possibly have in this election is that of a spoiler — someone who could damage Clinton’s chances in a swing state, effectively handing those electoral votes to Trump.

How big of a martyr complex must she have to not see that?

I don’t know, but she fails basic geometry. You can’t make a point if you don’t know how to draw a line.

October 9, 2016
Texas Minister Says He Can't Support Trump After His Lewd Comments. When Will Others Do the Same?
Next Post

October 9, 2016 Christian Preacher Joyce Meyer May Be Breaking Missouri Law By Promoting Her "Earned" Ph.D.
Browse Our Archives
What Are Your Thoughts?leave a comment