Evangelist Franklin Graham, last seen asking us to ignore Donald Trump‘s missing tax returns and focus on the real problem of the military using taxpayer money on gender reassignment surgery for transgender soldiers, has joined the chorus of conservatives who now say they won’t support the Republican nominee.

But it’s hardly a rejection of Trump. In fact, Graham sidesteps the whole issue of who he’s going to vote for, suggesting his vote isn’t going to change. 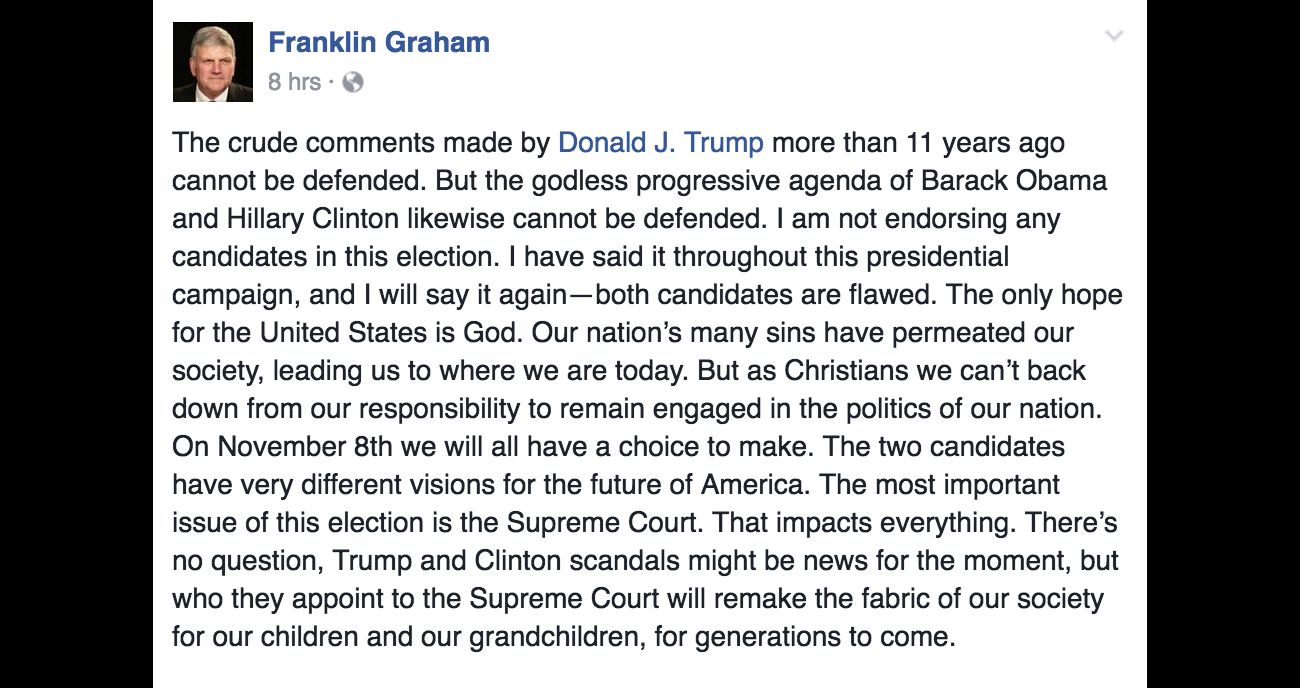 The crude comments made by Donald J. Trump more than 11 years ago cannot be defended. But the godless progressive agenda of Barack Obama and Hillary Clinton likewise cannot be defended. I am not endorsing any candidates in this election. I have said it throughout this presidential campaign, and I will say it again — both candidates are flawed. The only hope for the United States is God. Our nation’s many sins have permeated our society, leading us to where we are today. But as Christians we can’t back down from our responsibility to remain engaged in the politics of our nation. On November 8th we will all have a choice to make. The two candidates have very different visions for the future of America. The most important issue of this election is the Supreme Court. That impacts everything. There’s no question, Trump and Clinton scandals might be news for the moment, but who they appoint to the Supreme Court will remake the fabric of our society for our children and our grandchildren, for generations to come.

It’s not that he’s wrong about the Supreme Court’s importance, but the whole statement reeks of false equivalency.

The worst thing this Christian leader can say about Trump bragging about grabbing women “by the pussy” and sexually assaulting them is that it’s “crude.” He won’t “endorse” Trump, but he leaves open the possibility that he’ll still vote for the asshole.

He uses more words in this post to attack Hillary Clinton — the Methodist moderate who apparently has a “godless progressive agenda” — than he does the monster he’s been shilling for this whole time. His statement is as bad as Trump’s own “apology,” which deflected from his own actions and zeroed in on what Bill Clinton may have done.

Graham also describes Trump’s remarks as “news for the moment,” as if Trump admitting he kisses women who didn’t ask for it and once “moved” on a married woman “like a bitch” are nothing but mainstream media “gotcha” moments.

The Trump tape is only news because Trump and his followers can no longer deny that the man treats women as trophies waiting to be won. No amount of money can get him out of this mess. This wasn’t merely an entertainer trying to get a rise out of a crowd or win ratings. This was a predator who bragged about his attempted conquests to someone he just met, in private, when he thought the microphones weren’t on.

And Franklin Graham is gonna vote for that paragon of wholesome Christian values because the ends justify the means.

What would it take for Graham to finally say, “I’m not voting for Donald Trump”? Anything?!

I’m not expecting him to vote for Clinton, but the fact that I can’t answer that question tells you all you need to know about Graham’s own morality. His faith has clearly taught him nothing about basic human decency.