A 13-Year-Old Follower of Jainism is Dead After Fasting for 68 Straight Days October 8, 2016 Hemant Mehta

While the religion of Jainism has a reputation for being non-violent and generally harmless, I can tell you from experience (former Jain here) there are serious problems with their beliefs. It’s not just the belief in supernatural ideas like reincarnation and karma, there’s also pressure to fast on the high holy days. It’s not just for a day, either. Sometimes, the fasts last more than a week. (Pre-boiled water is allowed.)

My sister did that when she was in middle school — and seeing people close to me celebrating that unhealthy, dangerous decision was part of what drove me away from the faith. My mother still fasts — or eats just once a day — throughout the year, as do many of our family friends.

So while I can’t confirm this story coming out of Hyderabad, India, and while it seems absurd even by Jain standards, it’s not entirely out of left field. 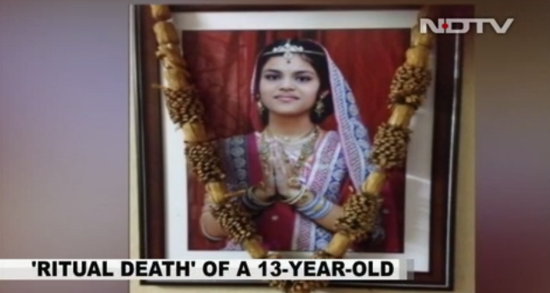 A 13-year-old girl in Hyderabad died last week after fasting for 68 days as per Jain rituals during the holy period of ‘Chaumasa‘.

Aradhana, a class 8 student, was was admitted to the hospital just two days after completing her fast where she died of cardiac arrest, the family said.

The story says she had successfully completed a 41-day fast earlier in her life… though success is likely defined as nothing more than “she didn’t die.” What the lengthy fast did to her body is anyone’s guess.

At least legal action is a possibility:

Child rights activist Shanta Sinha says a police case must be registered and the child rights commission must take action.

“A minor is not deemed to have a voluntary will to take decisions that can endanger their life. Religious leaders also need to re-look at what should be allowed and what is not,” she said.

A punishment for the parents may be what we need to stop this lunacy in the future.