According to a 2014 document from New Creation Church in Hillsboro, Oregon — which was leaked online by the site Stuff Christian Culture Likes — anyone looking to become a worship leader just has to follow a few basic rules:

Read your Bible every day. 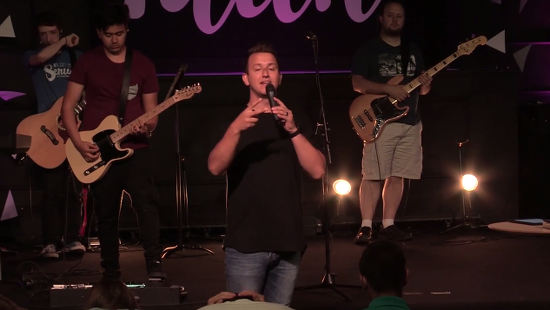 No Excessive weight. Weight is something that many people have to deal with. Make sure that you are taking care of your temple, exercising and eating properly.

Who made Donald Trump the pastor at this church…?

While staying healthy is a good idea, it’s a strange request. What counts as “excessive”? What about people who eat well but have slow metabolisms and just can’t lose weight? Are church leaders aware that the most religious states are also the heaviest? Also, who cares? They’re singing about Jesus, not running the 100-meter dash.

And does this rule apply to pastors, too? Because I know a few who are not following the rule at all.

When Lizzy Acker of The Oregonian contacted the church for comment, the person she spoke with was mostly angry that anyone was making a big deal about this:

New Creation Church Pastor Rebecca Sundholm says that the guidelines had been on the website for a long time and she said she was “dumbfounded” by the controversy.

“What’s funny is this has nothing to do with anybody else but our church,” said Sundholm over the phone Thursday. “If anybody looked at our worship team, they would see they aren’t all skinny.”

“In fact,” she added, “the worship leader has weight issues.”

One commenter on Facebook nailed it: “Nothing but Old Spice and Weight Watchers can wash away your sins.”

The document is no longer available on the church’s website. Even the church can shed excess it doesn’t want.

(Screenshot via YouTube. Thanks to Cris for the link)

October 7, 2016
Even God Can't Always Justify What the Bible Says
Next Post