Adults and Children in India Pray For Tamil Leader’s Health By Piercing Their Skin (and Worse) October 7, 2016 Terry Firma

Oh religion, you so crazy.

An elderly man is hanging from a crane, hooks pierced through the skin on his back. In his hand, he is holding a picture of his beloved leader, who is sick and in hospital. 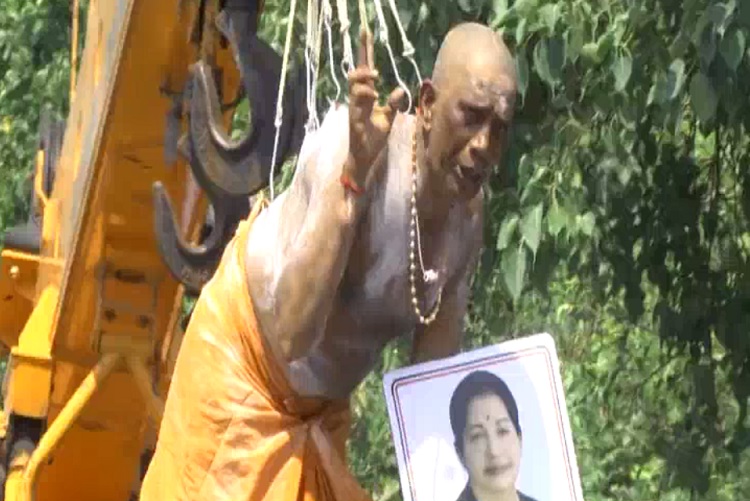 The picture he displays is of 68-year-old Jayaram Jayalalitha, the Chief Minister of the Indian state of Tamil Nadu. Her followers worry greatly about her ailing health. And so, they do what they can to (ahem) help:

In “sharing” his leader’s pain, the man says, he is praying for her speedy recovery.

Fine. As an adult, he can do as he pleases. At least he and his ilk aren’t pushing this abject nonsense on chil–

[I]n what many say is a shocking display of worship and obeisance, children with their cheeks pierced with metal arrows and foreheads smeared with holy ash pray for Amma (mother), as she is popularly known.

Amma fans are known for their creepy devotion. Last year, karate champion Shihan Hussaini took some six-inch nails and hammered himself to a large wooden cross — a birthday present to his idol.

But that’s nothing compared to former policeman R. Rathinam, who, upon hearing of Ms. Jayalalitha’s recent hospitalization,

… tried to set himself on fire by pouring kerosene on himself outside the gate of the Collectorate building in Salem, Tamil Nadu. He cried out, “Long live Amma,” before proceeding with his plan. The police on duty at the spot were agile enough to prevent him from causing too much damage to himself. …

This was not the first time Rathinam had taken a dramatic step to display his allegiance to his leader. As he told TNM, nothing, not even his own family, mattered to him as much as the well-being of the chief minister. In 2004, he had cut off three of his fingers at the Ramar Temple in Ayothiapattinam in the hope that Amma would win the polls with a huge margin.

He refused medical treatment at the time, saying

“How could I take back my offering which I have given to my god?”

Thoughts of the afterlife are one thing, but many Amma sycophants believe that extreme sacrifices may well launch them on a political career in the here and now:

Anyone could be noticed by Amma at any time and be catapulted to higher leadership. She has managed to have everyone believe that unquestioning loyalty to her will be rewarded. Which is why party-men routinely perform stunts to grab her attention and show how far they are willing to go for her.

A disturbing photo of children with both cheeks pierced by metal arrows — all for the glory of Amma — has surfaced here.

(Screenshot via the News Minute)

October 7, 2016
Even at a Private School, a Football Coach Shouldn't Hand Out "Optional" Bibles to Players
Next Post