The U.S. is “Polluting” Other Nations with Homosexuality, Says Christian Preacher

Christian “prophetess” Cindy Jacobs, who thinks she has “authority over the weather,” helped a woman grow three inches instantaneously, and claimed to turn metal into bone, is no stranger to making ridiculous, unverified claims.

No wonder she likes Donald Trump.

Speaking at a church event last week with her husband, Jacobs didn’t make any explicit endorsement, but she did warn the congregation that they had to vote, or else the U.S. would continue exporting Gay overseas. Specifically, she talked about our gay ambassador to Costa Rica: 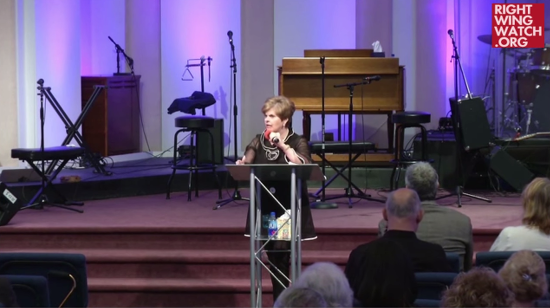 Cindy was similarly outraged, saying that local Christian leaders in Costa Rica “were all complaining to us about America and what we’re doing, how the ambassadors that were chosen were homosexual couples that were put in and sent into all the schools of their country, even though it was against their laws to have same-sex marriages and they were mad at us because we’re polluting their nations.”

“It matters who you vote for because who you vote for will put ambassadors in that will be our voice in the nations,” she said. “So we began shooting off emails, Mike did and and I did, to people we know in the U.S. and the next day that gay flag was down.”

Does anyone want to explain to her that homosexuality can’t be exported…? (Or “cured,” for that matter.) And embracing our nation’s support for civil rights, at least in theory, has been a hallmark of foreign policy for both major political parties.

Oh. One more thing. The U.S. ambassador to Costa Rica isn’t gay. Unless the whole “married to a woman” thing is part of some fiendish long game… The last two ambassadors, dating back to 2008, were also straight and married.

Not that Jacob will ever apologize. Lying is okay to her when it’s done in the name of Jesus.

October 6, 2016
Creationist Wins Six-Figure Settlement After Getting Fired From a California University
Next Post

October 6, 2016 Canadian Atheist Files Human Rights Complaint After Being Forced to Attend Alcoholics Anonymous
Browse Our Archives
What Are Your Thoughts?leave a comment