In 2009, Mark Armitage (below) was offered a part-time position as an Electron Microscopy Technician at California State University, Northridge. It wasn’t a teaching position or anything, so the fact that he was a Creationist (and said as much during his interview) seemed irrelevant. 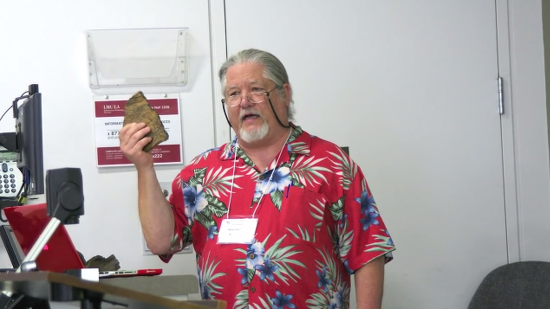 In 2012, after years of seemingly successful work in his position, he was asked to teach a class on Biological Imaging to graduate students. His Creationist beliefs, again, didn’t make a difference. (A microscope works whether or not you accept evolution.) I guess it also didn’t matter that his degrees came from Liberty University and the Institute for Creation Research.

It was only after that when things began getting weird. Armitage was invited that summer to go on a dinosaur dig at the Hell Creek Formation in Montana. While there, he happened to uncover “the largest triceratops horn ever recovered from that site.” When Armitage studied the fossils back in his lab, he discovered something amazing: There were soft tissues present. There was no way that a 68,000,000-year-old fossil could have had any soft tissues still around, he figured, since those tissues take no more than a million years to decay, tops.

So Armitage offered a different theory: The fossil was much younger than we ever anticipated. Forget millions of years; think a few thousand. It was proof of Creationism! Somewhere, Ken Ham began dancing.

This would be a good time to point out that there actually is a very good explanation for how soft tissue in dinosaur bones could have survived: Iron in their bodies may have protected the tissue before it decayed.

But just ignore that. Where were we? Oh, right. PROOF OF CREATIONISM!!!!

Armitage began talking about the supposed Young Earth implications of his findings in his classroom, and word got back to Dr. Ernie Kwok, a biologist at the university. Armitage alleged in an eventual lawsuit that Kwok shouted at him, “We are not going to tolerate your religion in this department!!” (Which is a strange thing for Armitage to claim, since I had no idea you could tell when someone verbally used two exclamation marks in a sentence.)

Despite the confrontation, no actions were ever taken against Kwok.

Armitage eventually got his findings accepted in the Japanese journal Acta Histochemica the following January and published later that summer. (In case you’re wondering how that happened, the paper made no mention of Creationism, God, Intelligent Design, the age Armitage believed the tissues to be, or anything remotely controversial. It was just a paper about his findings.)

And then Armitage was fired.

He argued in his 2014 lawsuit that Kwok convinced their employers to get rid of him because of his Christianity. That constituted religious discrimination and violated his academic freedom. The school’s side of the story is that Armitage was a great employee, but his appointment had always been temporary, there was a lack of funding, and his Creationism had nothing to do with his termination.

This would be a good time to point out that Armitage once wrote a book called — and I’m totally serious — Jesus is Like My Scanning Electron Microscope: 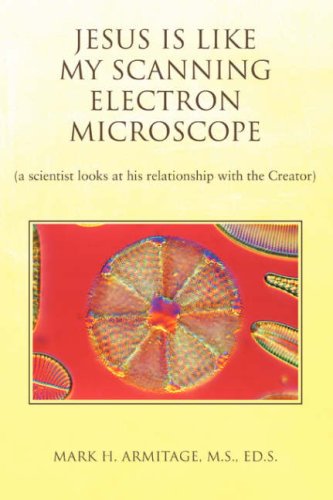 Back to the story: There was really no smoking gun in the lawsuit proving Armitage was fired because of his Creationist beliefs. Just a lot of hearsay and conspiracy theories. And California is an “at-will” state, so employers can fire you at any time, with or without cause. It seemed likely that a judge would just dismiss the lawsuit.

That, however, isn’t what happened.

This week, the university settled its case with Armitage. They admitted no fault, but Armitage received a sizable settlement.

In a telephone interview Monday with The College Fix, Reinach declined to state the exact amount of Armitage’s settlement, only that it was a six-figure dollar amount, “a substantial settlement representing about 15 times his annual part-time salary.”

The university maintains Armitage was let go due to budgetary reasons, and that the public, Los Angeles-based university settled the case to avoid a costly, protracted legal battle.

As for the settlement, she stated: “The Superior Court did not rule on the merits of Mr. Armitage’s complaint, and this voluntary settlement is not an indication of any wrongdoing. The decision to not renew Mr. Armitage’s contract was based on budgetary considerations and a dwindling need for his services. The decision to settle was based on a desire to avoid the costs involved in a protracted legal battle, including manpower, time and state dollars.”

The school is essentially saying, “We don’t want to keep fighting this battle. Here’s some money. Please go away now.”

Which, in Creationist world, probably means the school admitted guilt and evolution is now debunked.

Armitage’s lawyer is certainly leaning in that direction:

… the attorney added that “in our view, they certainly would not have paid that kind of money if they did not recognize that we had them dead to rights. The state doesn’t put large, six-figure settlement money out unless they are really concerned they are going to lose.”

That’s not necessarily true. If it’s going to cost a lot more money to fight a case that you’ll ultimately win, it may be more strategic to settle for less, admit no fault, and just be done with it.

Armitage himself declared the settlement a “win” in an odd YouTube video in which he frequently refers to himself in the third person:

Whatever the result, he’s no longer at the university. And his theories haven’t gotten anywhere in the scientific community, either. He’s nothing more than a whiner who assumed Christian Persecution was at the heart of a setback in his professional life — and he just got rewarded for it.

October 6, 2016
In Lawsuit, Prisoner Says Nevada Officials Discriminated Against Him for Being an Atheist
Next Post