What happens when a Christian mother with four kids hears a hip-hop song with risqué lyrics on the radio?

If you’re this unnamed woman, you read the lyrics to Vince Staples‘ “Norf Norf” out loud on YouTube, bawl your eyes out, and long for the good old days when no one ever sang explicit songs. (Because all songs were rated G until last year, don’t you know.)

Get the popcorn ready because this is glorious. 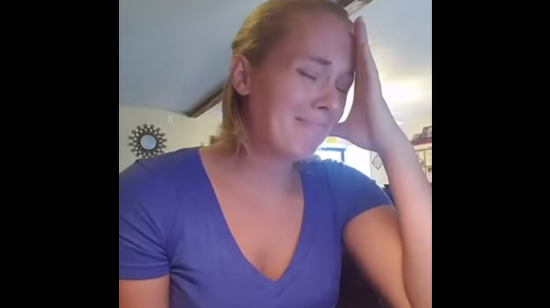 Here’s just a glimpse at the lyrics of “Norf Norf” if you’re unfamiliar with the song:

Put that on my Yankee hat
I’m a gangsta Crip, fuck gangsta rap
Where the ladies at? Where the hoes? Where the bitches?
Every real nigga know the difference
Bandana brown like the dope daddy shootin’ in the kitchen
Real Norfside nigga, never went to Poly, Wilson or Cabrillo
Cocaine color of a creole
T-Skrap moving for the d-low, and he know

That’s some great poetry right there.

Her complaint is that, even with the curse words bleeped out, the song should never have been playing on a local radio station.

“I remember listening to the top hits as a kid,” she says. “You know Britney Spears, Christina Aguilera, Backstreet Boys, and N’SYNC. Those were the top hits when I was a kid. Nowadays it’s not the same, not the same at all.”

I remember those family-friendly, white Disney-approved acts… but I’m guessing she doesn’t remember this lyric from Britney Spears‘ “Toxic,” which was constantly on the radio…

It’s getting late
To give you up
I took a sip
From my devil’s cup
Slowly, it’s taking over me

I guess Spears was singing about taking Nyquil before bed.

Or how about Christina Aguilera‘s “Dirrty”?

Body’s hot, front to back
Now move your ass, I like that
Tight hip-huggers, low for sure (whaddaya got?)
Shake a little somethin’ on the floor
I need that, uh, to get me off
Sweatin’ tiil my clothes come off
Let’s get open, ’cause a commotion

Point being, music wasn’t any more “wholesome” when she was younger. It’s just a different kind of music. Singers have always been raunchy, using whatever innuendo was available to them, if not the explicit words themselves. If she doesn’t like this particular song, she can change the station, but it’s hardly a new phenomenon.

She’s missing two important points, though. First is that Vince Staples’ song actual includes some rather uplifting, hopeful lyrics (which is the case for a lot of rap music). Incilin at Genius explains:

He might rap about guns and gangs, but he doesn’t romanticize them. Songs like “Norf Norf” highlight Vince’s cold, hard outlook on the realities he faced growing up in Long Beach.

Second, if this Christian mother is really upset about the sex, violence, and misogyny in the music, she should definitely keep her children away from the Bible. Because that book is way, way worse.

The only thing that would make this story better is knowing she was hired by Vince Staples to be part of some viral marketing campaign for his next album. In any case, I can’t wait for the sequel where she reads the lyrics to Nicki Minaj‘s “Anaconda.”

***Update***: Because this is the internet, someone added a beat to the mother’s version of the song: