Can a Christian Apologist Answer the Question That Turned His Daughter Into an Atheist? October 6, 2016 Hemant Mehta

Can a Christian Apologist Answer the Question That Turned His Daughter Into an Atheist?

It was three years ago when we first posted an article by Rachael Slick, the daughter of noted Christian apologist Matt Slick, all about her journey to atheism.

She wrote about how she had remained a Christian long after the doubts first began because a world without God left her with so many questions, while, thanks in large part to her father, she knew the answers whenever Christianity was criticized.

But one question eventually stumped her. It also stumped her friend Alex.

I had a habit of bouncing theological questions off him, and one particular day, I asked him this: If God was absolutely moral, because morality was absolute, and if the nature of “right” and “wrong” surpassed space, time, and existence, and if it was as much a fundamental property of reality as math, then why were some things a sin in the Old Testament but not a sin in the New Testament?

Alex had no answer — and I realized I didn’t either. Everyone had always explained this problem away using the principle that Jesus’ sacrifice meant we wouldn’t have to follow those ancient laws.  But that wasn’t an answer. In fact, by the very nature of the problem, there was no possible answer that would align with Christianity.

That was the first domino. The others toppled quickly after that.

I bring all that up because Dogma Debate’s David Smalley recently debated Matt Slick on the topic “Is the God of the Old Testament a Moral Monster?” And during the Q&A part of the evening, one of the audience members, known online as Holy Koolaid, decided to ask Slick the exact same question — verbatim — that once stumped his daughter.

He then made a video about the exchange: 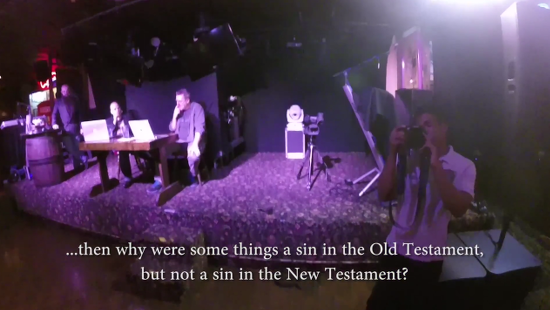 There was an answer… it was just an extremely confusing one. No wonder Rachael couldn’t make any sense of it when she was younger. (In case you’re wondering, nothing in Slick’s response suggested he knew what prompted that question.)

So the question remains: If there is such a thing as moral absolutes, then why were Old Testament “sins” no longer considered problematic in the New Testament?

Without bringing up the non-answer of “Jesus made it so,” is there a rational explanation?