Any atheist on the internet has probably seen a photo of a church sign with some variation of the following line: “Forgiveness is swallowing when you want to spit.” It’s funny because the double entendre seems obvious to everyone outside the church.

I’ve never read an article that followed up with one of those pastors, though.

The Daily Post (UK) caught up with Rev. Bob Marshall of Ebenezer Baptist Chapel in Wales to find out how he learned about the sign’s other meaning: 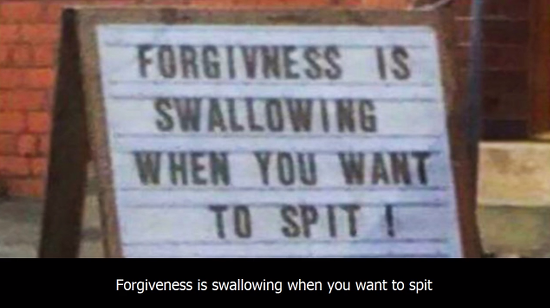 Rev Marshall said: “When I put that sign out I had no idea what it meant over here. Forgiveness is what it’s all about. One lady said she didn’t even see the word forgiveness.

“It’s obvious to me what I meant but it never really entered my mind it had another meaning.”

Rev Marshall, who has lived in Buckley for 30 years, joked there was some divine intervention when the British interpretation of the sign’s meaning became apparent.

“The Lord helped me take it down because the wind blew it over,” he said.

At least he’s a good sport about it all.

As we’ve said many times before on this site, pastors should always run their church signs past a teenager first.

(Screenshot via YouTube. Thanks to Tom for the link)

October 5, 2016
Newt Gingrich is Recruiting Pastors to Run for Office to Prevent "Totalitarian Secularism"
Next Post

October 5, 2016 Televangelist Rick Joyner Denies Climate Change: "We Haven’t Had Any" Hurricanes Since Katrina
Browse Our Archives
What Are Your Thoughts?leave a comment