Televangelist Rick Joyner Denies Climate Change: “We Haven’t Had Any” Hurricanes Since Katrina

Televangelist Rick Joyner, appearing on The Jim Bakker Show last week, explained that climate change proponents predicted we’d see bigger and more frequent hurricanes over time, but that’s a joke since there “haven’t been any” since Katrina!

That’s easy to say if you just ignore the devastation caused by other hurricanes not named Katrina. 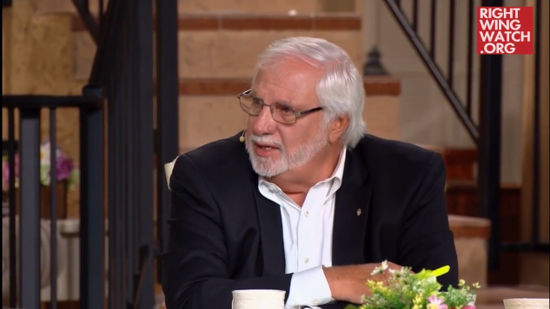 … Remember after Hurricane Katrina, they were just screaming bloody murder? There’s gonna be more hurricanes, they’re gonna be more powerful. Then we went 11 years without another hurricane.

I said, “Okay! If this is true, you lied to us! You said they were going to be more and bigger.” We haven’t had any.

Joyner might have been able to get away with what he said if he argued we haven’t seen bigger hurricanes. While Katrina was a Category 5 storm, Hurricane Ike was a Category 4, and Hurricanes Irene and Sandy were both Category 3s.

(Hurricane Matthew, which just hit Haiti and is heading toward the eastern part of our country, is also a Category 5.)

But instead, Joyner argued that we haven’t seen another hurricane, period, in 11 years. It’s a patently false claim that can be debunked with about two seconds of thought or one Google search.

Remember the moral of the story, kids: Lying is always okay if you’re doing it in the name of Jesus.

October 5, 2016
That Awkward Moment When a Pastor Learns His Church Sign is Also Sexual Innuendo
Next Post