A couple of years ago, David Lane, the founder of the American Renewal Project, announced his project to recruit 1,000 Christian pastors to run for public office. Because there aren’t enough Christians in politics already…

Lane is still working on that plan, and he now has the help of Newt Gingrich! The former Speaker of the House and perennial presidential candidate released a video this week urging pastors to run for office so they could push back against “those who would impose a totalitarian secularism on us.” 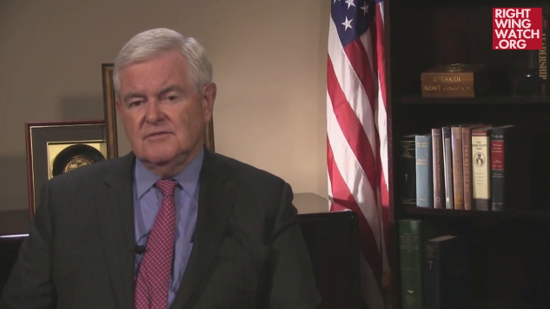 “We have not seen the Judeo-Christian historic traditions threatened the way they are today ever in American history,” Gingrich said. “I think you have a duty … to have the courage to stand up and tell the truth; tell the truth about those who would impose a totalitarian secularism on us, force us to bow to the power of the government in order to do things that our religious forbids, you have a duty to tell the truth about those who would kill us in the name of Islamic supremacy. And if you do your duty, you will be part of launching a Great Awakening that could once again help America.“

How bad is your Persecution Complex that you think Christians are threatened in our society? Has Gingrich ever met a member of a minority group? Christians still make up the majority of Congress, the majority of the Supreme Court, and the Presidency. There may be more religious diversity than ever before, and more people without religious affiliation, but that doesn’t mean Christians have no power.

Gingrich and Lane don’t really want Christians in office. They want conservative Christians — the only brand that matters — making the big decisions. They want to eliminate bodily autonomy for women, overturn LGBT rights, ruin science and sex education, and tear down the wall of separation between church and state.

Don’t dismiss this idea, though. Lane and Gingrich have taken steps to make this happen. What has our side done to counter it?

October 5, 2016 That Awkward Moment When a Pastor Learns His Church Sign is Also Sexual Innuendo
Browse Our Archives
What Are Your Thoughts?leave a comment