A Debate Over Whether Atheism or Christianity is More Reasonable October 5, 2016 Hemant Mehta

A Debate Over Whether Atheism or Christianity is More Reasonable

A couple of weeks ago, at the Seattle Town Hall auditorium, atheist David McAfee (a frequent contributor to this site) and Christian apologist Luuk van de Weghe took part in a friendly debate on whether atheism or Christianity was more reasonable.

Video of that event is now online: 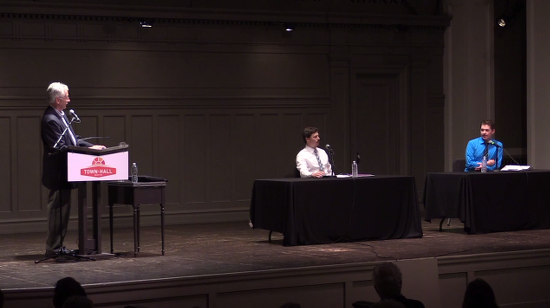 One line I really liked at 56:57: “Saying we get morality from religion is like saying we get our trees from houses. Because it’s completely backward.”

Also, there’s a really great exchange at 1:22:00 where the Christian is asked whether he would believe the testimony of a random guy on the street who suddenly claimed to be Jesus Christ. After he answers the question, David’s rebuttal is excellent.

I haven’t had a chance to watch the entire debate yet, but if any other parts stand out to you, please leave the timestamp/summary in the comments!