Rush Limbaugh Thinks Solar Panels Are Useless Because the Sun Goes Down at Night October 4, 2016 Tracey

Of all of the racist, ignorant, offensive, sexist things Rush Limbaugh has said over the years, this one may win the prize for most objectively wrong statement he’s ever made.

In an urgent warning to Millennials, (because, you know, they’re the only age group who care about clean energy), Limbaugh mocked solar panels for their inability to work when the sun is not present. I repeat: He thinks solar panels stop working at night and that’s reason to dismiss them entirely.

Does he also think phones don’t work when they’re not plugged into the wall? Or that your car stereo doesn’t play unless you’re driving? (Spoiler: They do.) 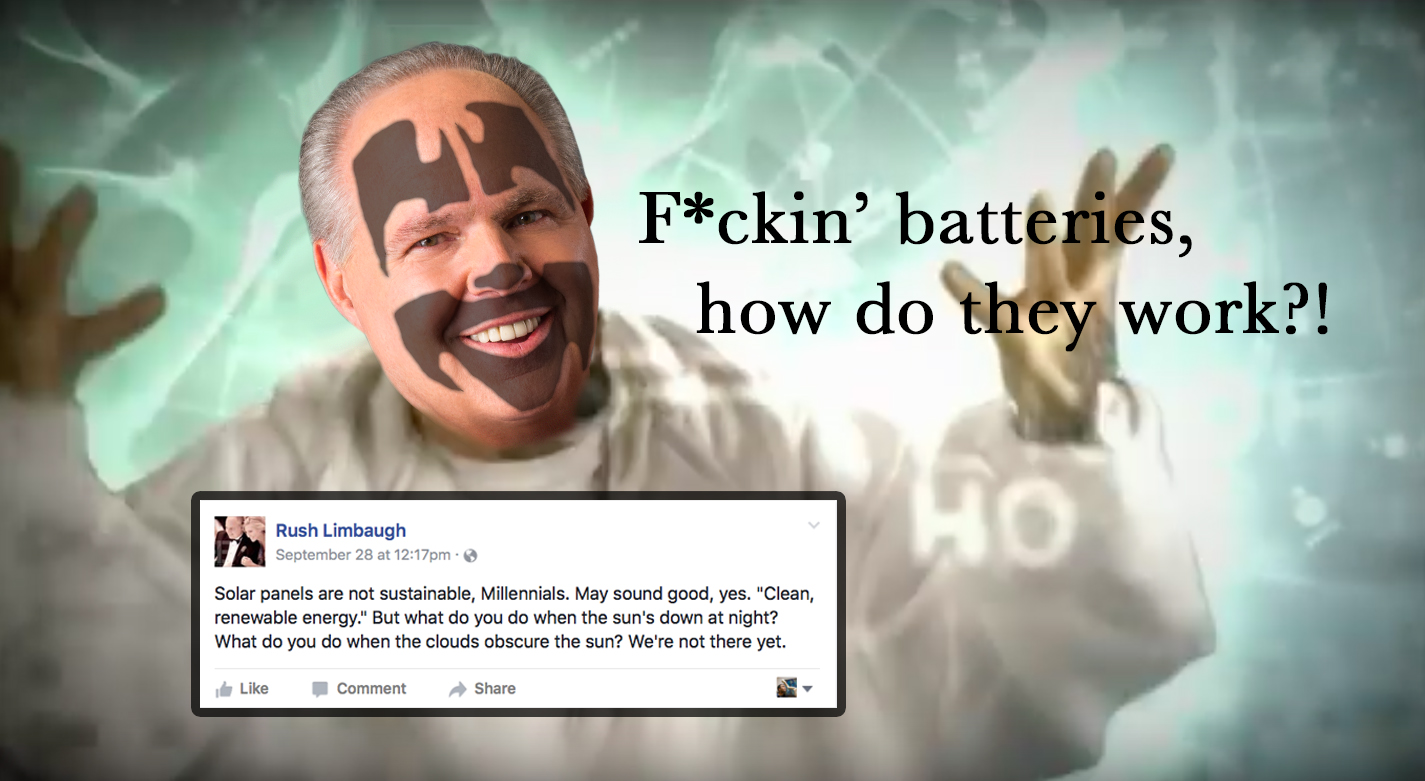 Because we know Limbaugh has a history of saying terrible and dumb things without remorse, we feel confident he’s not joking. He’s also not a fan of fact-checking, as he coincidently expressed on his show the day he made this solar panel post on Facebook.

There is no fact-checking.

The fact that The New York Times, and The Washington Post, and USA Today, and all these other papers and networks now have fact-checkers is for one reason. It allows them to fool you into thinking they have an objective, nonpartisan staff or person analyzing everything the candidates are saying, and telling you what they’re saying is true, or what they’re saying is false.

Yes, facts are Limbaugh’s worst enemy. But you don’t even need the fact-checkers from major newspapers to handle this one. A third grade science textbook will do just fine. It turns out batteries power most cordless devices. In fact, we can confirm (off the top of our heads!) that the energy generated from the sun’s photons, captured by solar panels, is stored in batteries for use when Jesus turns the sun off for the night.

But don’t take our word for it. Here’s Tesla’s website, where they explain exactly how their Powerwall “stores electricity generated by solar panels during the day and makes it available to your home in the evening.”

Whatever his real objections are to solar energy, dismissing it for this reason is a joke. If only his listeners would realize that.

(Edit: We revised the headline to be more accurate.)

October 4, 2016
Donald Trump to Veterans (In Short): We Need More Christian Privilege, Equality is Too PC
Next Post