While there will be plenty of commentary about the Vice Presidential debate — Did Tim Kaine interrupt too often? Why would Mike Pence act like his running mate never said all those things he totally said? — there was one portion of the evening that revealed what both candidates really think about church/state separation. 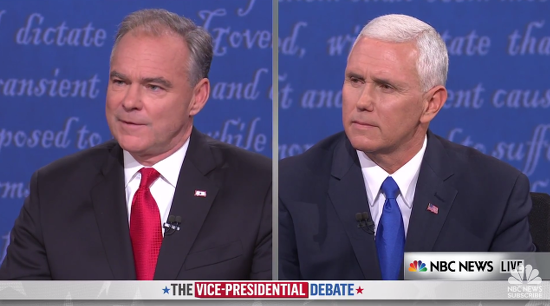 At the end of the debate, moderator Elaine Quijano asked both men, known for their strong religious beliefs, to “express in detail a time that you have struggled to balance your personal faith and the public policy decision.”

Democrat Tim Kaine discussed the tension he felt over the death penalty:

… I try to practice my religion in a very devout way and follow the teachings of my Church in my own personal life. But I don’t believe — in this nation, a First Amendment nation, where we don’t raise any religion over the other, and we allow people to worship as they please — that the doctrines of any one religion should be mandated for everyone.

For me, the hardest struggle in my faith life was: the Catholic Church is against the death penalty and so am I. But I was governor of a state, and the state law said that there was a death penalty for crimes if a jury decided them to be heinous. And so I had to grapple with that. When I was running for governor, I was attacked pretty strongly because of my position on the death penalty. But, I looked the voters of Virginia in the eye, and said, “Look. This is my religion. I’m not going to change my religious practice to get one vote, but I know how to take an oath and uphold the law. And if you elect me, I will uphold the law.”

And I was elected and I did.

It was very, very difficult to allow executions to go forth, but in circumstances where I did not believe there was a case for clemency, I told Virginia voters I would uphold the law, and I did… That was a real struggle, but I think it is really, really important that those of us who have deep faith lives don’t feel like we can just substitute our own views for everybody else in society regardless of their views.

As someone who opposes the death penalty, I kind of wish Kaine would’ve followed the Catholic Church on this one… but as a matter of public policy, that was a great answer.

And for those of us who support church/state separation, it’s a response we should proudly embrace.

We can argue all we want against faith in general, but people are going to be religious for a long time. The question is how they put it into practice. Kaine made very clear that when his personal beliefs conflicted with the law, he followed the law. As the saying goes, when he took an oath, he put his hand on the Bible and swore to uphold the Constitution, not the other way around.

That’s all we can ask for.

Compare that to Republican Mike Pence, who talked about the abortion issue and how he chose his faith over a woman’s right to choose, specifically pointing to the issue of partial-birth abortion.

… I know you [Sen. Kaine] hold pro-life views personally. But the very idea that a child that is almost born into the world could still have their life taken from them is just anathema to me. I can’t conscience [sic] about a party that supports that. Or I know you have historically opposed taxpayer funding of abortion, but Hillary Clinton wants to repeal the long-standing provision in the law where we said we would not use taxpayer dollars to fund abortion.

So for me, my faith informs my life. I try and spend a little time on my knees every day. But it all, for me, begins with cherishing the dignity, the worth, the value of every human life.

That’s a long-winded way of saying Pence wasn’t kidding when he explained that he wanted to “see Roe v. Wade consigned to the ash heap of history where it belongs.” This is the governor, after all, who signed a law earlier this year banning abortions based on why the woman wanted to have one, who banned fetal tissue collection for research purposes, and who removed funding from Planned Parenthood because they happen to provide abortion services.

This is someone whose thinks his religious beliefs trump the rights of people who don’t necessarily share his views. As the joke went, “Mike Pence is a fierce defender of your right to practice his faith.”

And none of that even gets into how his Christianity affected LGBT people in Indiana — how he allowed Christian business owners to discriminate against gay customers — a topic that was completely overlooked during the debate.

Given the mild religiosity of Hillary Clinton and the fake Christianity of Donald Trump, one of these men could be a heartbeat away from the Presidency come November. Whose vision of Christianity would you feel comfortable with informing decisions in the White House?

Sure, you may not want anyone’s religion to be relevant in the Oval Office, but it’s obvious that Tim Kaine is doing everything church/state separation advocates have always asked for. His personal faith is mostly irrelevant. On public matters, he follows the law. And he’s not the type of person who feels an obligation to foist his beliefs on the public, even if he has the power to do so.

Mike Pence has repeatedly shown the people of Indiana that conservative Christians will always get the better end of the deal. That should be frightening to anyone outside that bubble — and I wish it were just as troubling to people inside of it.

You don’t have to worry about Catholic doctrine creeping into the White House with Tim Kaine as Vice President. That wasn’t in doubt before, but it was especially crystal clear tonight.

October 5, 2016 Seven Memorable Atheist Mic Drops
Browse Our Archives
What Are Your Thoughts?leave a comment