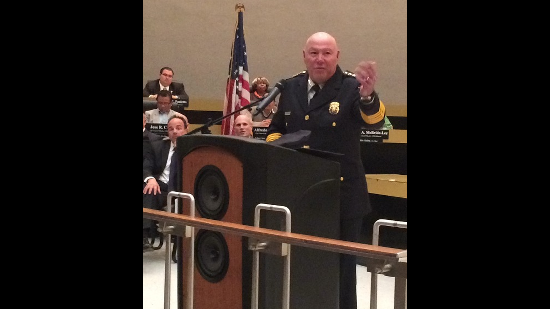 The Freedom From Religion Foundation has now sent a letter to Perez, letting him know just how absurd his comments were:

“It is a fundamental principle of Establishment Clause jurisprudence that the government cannot in any way promote, advance, or otherwise endorse religion,” FFRF Staff Attorney Andrew Seidel writes to Perez. “It is unconstitutional for government officials to use their government office to advance, promote or endorse one religion over another, or religion over nonreligion. You must keep your religion to yourself when acting in your official capacity as police chief.”

Plus, Perez’s harangue fails as sociological analysis, too. If Perez wants people to be more religious to help alleviate crime, he is engaged in a futile exercise. Prayer cannot stop violence. In fact, scientific studies show that societies with less prayer have less violence.

A better police chief would immediately apologize and talk about how he plans to stop crime instead of doubling down on his baseless criticism of atheism.

No response yet, though.

***Update***: The Connecticut Coalition of Reason has also sent their own blistering letter to Perez.

October 4, 2016 In Texas School District, Teachers Joined Students for See You at the Pole Prayer Event
Browse Our Archives
What Are Your Thoughts?leave a comment