A couple of weeks ago, just after Georgia’s Heritage High School football team finished practice, there was a mass baptism. The students were joined by the team chaplain (they have one of those), a minister, and the head coach as they all watched nearly a dozen teammates accept Christ into their lives. And it was all shared online. 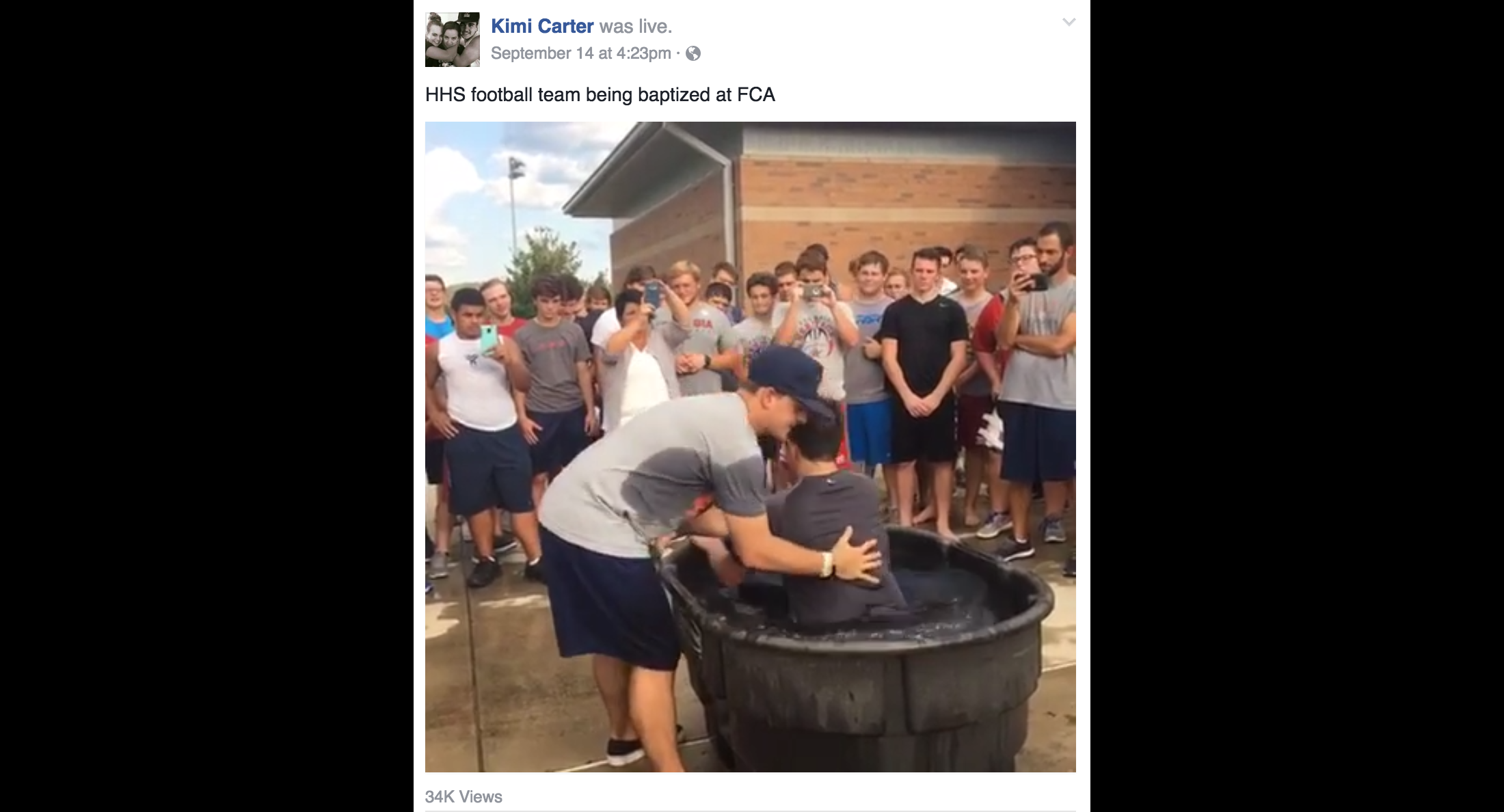 The coach’s message was brief — about two minutes — but heartfelt. “This is about you and this is about your relationship with Christ and nothing else, ‘K? It’s a big step for you,” [E.K. Slaughter] told the students.

After the eleventh boy was dipped and embraced by his peers, Slaughter asked all the dripping-wet players to stand in a line next to him before making closing remarks. “My love for my Lord is a daily decision, ‘K? So choose every day to do that. And anybody whose been baptized is no different. We’re in the same boat, right? Every one of us has got to make a decision every single day.”

All of this was precipitated by the death of a beloved cheerleader who graduated from the school just last year. Her sister took the video, her brother was the minister, and the head coach knew her well.

Those details, however, are irrelevant when it comes to whether this baptism violated the law. It wasn’t student-led and the head coach was an active participant in the proceedings. It’s no different, legally speaking, from the assistant coach from Washington who prayed on the field immediately after games and was eventually fired when he refused to stop.

That’s the Freedom From Religion Foundation’s take on it, anyway, though you can see how this might be controversial on several levels given all the emotions involved.

“Courts have repeatedly ruled that public schools cannot appear to endorse, promote, or favor religion in general or any religion in particular,” [FFRF attorney Liz] Cavell told Vocativ. “A head coach organizing or leading a team baptism, encouraging the students being baptized — these actions unmistakably communicate to the players and students present that the coach is in favor of the baptism, and that those being baptized into Christianity are doing something that pleases the coach.”

The FFRF believes that the tragic event that inspired this baptism does not make the matter any more ethical. “Losing a beloved recent graduate is a terrible tragedy and we understand the district community must cope and grieve together,” Cavell said. “But this can and should be done in a way that does not give the clear impression that the school district endorses religion or a particular religion.”

The problem is all the more apparent when you realize that another Georgia high school got in trouble for the exact same thing last fall. They eventually apologized for the mass baptism and promised never to do it again.

And just to repeat what I said back then, this isn’t persecution. The problem is that the coach participated in a religious event with students — in his capacity as a coach. He can’t do that. FFRF isn’t preventing the students from organizing a baptism on their own. The group isn’t taking away anyone’s right to pray, or read the Bible, or honor their friend, or participate in a religious ritual.

FFRF just sent the District a warning letter, which means Christian groups will start to act like it’s the end of the world and Todd Starnes will go into his daily apoplectic fit. Just remember that the tragic situation isn’t the issue here. It’s all about a coach using his position at a public school to lead students to Jesus. If this story were about a coach leading kids to Islam, atheism, or Satanism, everyone would understand the problem. They shouldn’t give him a free pass just because he promoted Christianity.

October 4, 2016 Atheist Group to CT Police Chief Who Blamed Atheism for Crime: "Stop Disparaging Nonbelievers"
Browse Our Archives
What Are Your Thoughts?leave a comment